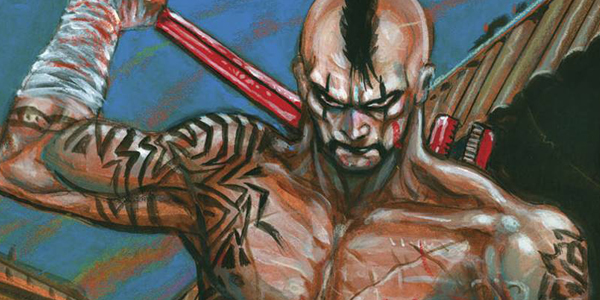 Can the new Crow, Salvador, avenge his own death and destroy the SDC? Find out in our look at The Crow Pestilence #1 from IDW.

For years the SDC has profited on importing women to the U.S. to serve as waitress’s and propositioning higher class men as call girls. They also had their hands in fixing fights from time to time, and created their own worst enemy, the new Crow. 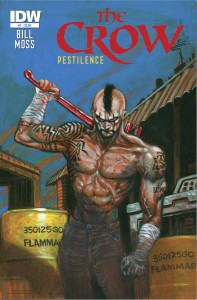 Salvador was a boxer and a man desperate to make money to support his wife and son. He was told to throw a fight, but he couldn’t do it. He tried to escape after his win and head to the US with his family, but the SDC was one step ahead of him. They caught him as he was coming out of the arena, torturing and killing the fighter.

Salvador begins his journey to revenge by hunting down Raw Dog, the man who pulled the trigger ending the fighter’s life. Raw Dog was busy torturing another woman and her son when Salvador finds him. Simply by touching Raw Dog he is able to obtain everything he needs to know and after he tortures and kills Raw Dog, he free the woman and her child.The Crow speaks to Salvador through his mind, leading him to weapons and ammo to aid him in his quest for revenge by hunting down the other four members of SDC.

The Crow Pestilence delivers another tale of the wrongs being righted through those who have been murdered. New city, new twists, and new characters makes for great story.