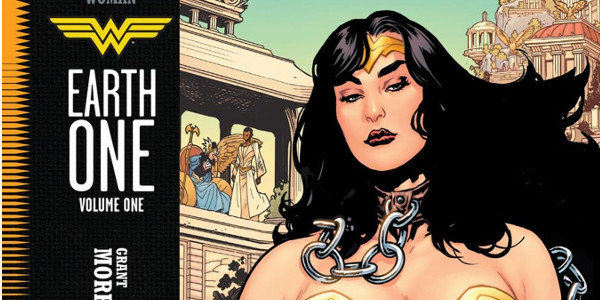 Grant Morrison shows his love for the classic version of Wonder Woman.

The Earth One series of graphic novels have been retelling iconic DC Comic characters with a modern and sometimes, realistic, twist to them. Not hindered by 75 years of history and continuity, it gives creators to explore characters differently. The latest in the series is Wonder Woman. Written by Grant Morrison and drawn 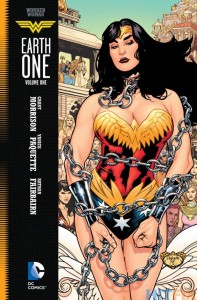 The story starts off in ancient Greece, with Hippolyta freeing her Amazon sisters, slaying Hercules, and deciding to separate themselves from the “World of Man” to a remote island. The story then picks up in modern times with Princess Diana. Like in all adaptations, she’s eager to leave Paradise Island and her mother doesn’t want to. When Steve Trevor’s plane crashes, Diana knows she must disobey Hyppolyta and turn her back on her sister Amazons. But is Man’s World ready for Diana?

One of the elements that Morrison touches on, that stood out in my head, is what about love on this island of all women. Morrison’s solution is they are lesbians. Not in a dirty sense. Again, there’s still love. It has to be a relationship between two people who love each other.

It’s also entertaining when Diana first encounters Steve. She’s never seen a man before. She’s only either heard about them or read about them. So the first thing she does is grab his crotch. I thought it was hilarious.

Yancik Paquette artwork is on point here. It’s as beautiful as ever. But as the same time, there’s not really a flow of action. When we see most of the women, they are posed as cheesecake models. It distracted me from the book. It didn’t seem natural at all. I just found so surprising to see this from Yanick because the man can do great action sequences.

Overall, when you drill down to the core, this is still the same Wonder Woman we are used to. Wide eye about Man’s World, but behind those eyes is a warrior that will not back down from a fight.

Earth One Wonder Woman will be available on April 6th.