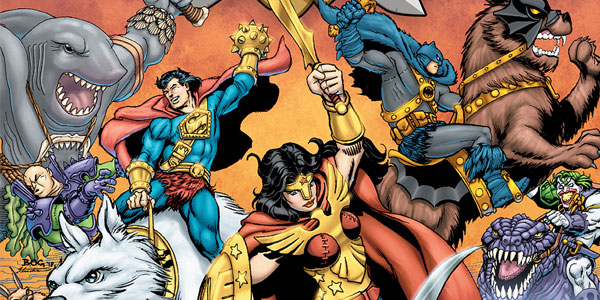 I’ve been intrigued by all the alternate history toy lines, the meta concept that launched with the Alien ReAction toys released by Super7. Since then there have been a lot of toy lines released under a similar conceit– what would X property have been like if it was released by Y company in Z era. The result has yielded some fun hypothetical throwback collectibles, but few tapped into what truly made so many 80s toy properties so memorable. He-Man, Thundercats, GI Joe, MASK… none of these were just toy lines, they were multi-media franchises, complete with cartoons, comics, and more. 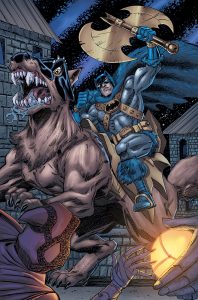 I bring this up because DC The Primal Age– Funko and DC’s reimagining of some of comics’ most iconic heroes and villains in the universe of the Masters of the Universe– achieves this multi-platform approach. Not only is there a hole wave of 80s-inspired action figures, there’s also a tin lunch box, a Primal Age Batman t-shirt, and a 100-page Giant Size comic which introduces the world of Primal Age.

The Primal Age comic book features six stories set in this universe. In addition to the primary story, we get solo features starring Wonder Woman, Mr. Freeze, Batman, The Joker, and Superman. Most of the stories retain a fun tongue-in-cheek tone, fully self aware that this is essentially a 100-page ad for the toy line. I credit this to the impressive stable of classic creators DC has tapped for this project, a lineup that includes Marv Wolfman, Scott Koblish, Jerry Ordway, Louise Simonson, and more. 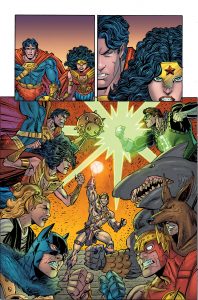 There’s a cleverness to how the pillars of the DC Universe are adapted to this sword and sorcery world, both in terms of the main heroes and villains, as well as supporting characters (Lucius Fox is reimagined as a benevolent mage!). And while the plotlines are all simple and straightforward, they serve as a good introduction to this universe and these iterations of the characters. There’s a lot of fun to be had even in the character designs, which successfully tow the line between super heroes and He-Man barbarians… right down to the charmingly inexplicable flourishes added to the mix, like Superman’s golden mace hand.

I can’t think of a more entertaining way to introduce DC’s Primal Age than this comic, and also serves as a cool way to build out the meta-history of this franchise. Look for the Primal Age Giant Size comic book, along with the rest of the Primal Age collection, at Target stores now.

Thanks to DC for giving us the chance to check out this fun new comic!