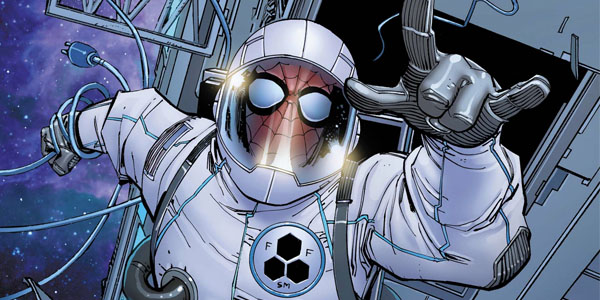 Spaceman has returned!  Sorry, I just couldn’t contain my excitement.  This week contained quite a few interesting titles, including the first issue of a new Batman Beyond run and a sci-fi adventure starring Spider-Man…in space!  Yes, really!  Keep reading! 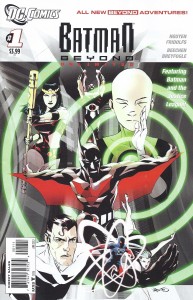 Having never been a huge fan of the popular Batman Beyond cartoon series, I didn’t have much of a reason to grab the new comic off the shelf this week aside from the awesome cover art by Dustin Nguyen.  The idea of a highly futuristic Gotham city just doesn’t appeal to me; the city itself is just as important to Batman’s universe as the Joker or the Batcave and it loses much of its appeal in the transition to a technologically advanced and clichéd metropolis.  Unfortunately, the same could be said about the book itself.  We’re introduced immediately to Terry McGinnis, the heroic teenager who dons a ridiculously tight bat-suit.  He’s fighting a gang of Joker wannabes (the Jokerz) while cracking all kinds of wise of the cringe-worthy variety.  There’s a scene with a girl named Max trying to hack into a criminal organization. Terry visits his ex-girlfriend and begs for forgiveness, after which he’s back in the suit fighting a bunch of beefed up clowns with giant hammers; and that’s just the prelude!  The real story, written by Derek Fridolfs and Dustin Nguyen and penciled by Nguyen, begins with another bang.  Genetic animal augmentation known as “street splicing” is all the rage and gangs are battling for control of it until Batman and the rest of the alternate-universe Justice League intervene.  From there the story gets surprisingly convoluted for a first issue, making references to characters and events that will be totally lost on those who haven’t followed the series in the past.  This alternate version of Batman’s universe is clearly intended for a different audience than typical Batman fare, and while I can see fans of the late-90s TV show enjoying it, fans of Bruce Wayne’s adventures in Gotham need not apply. 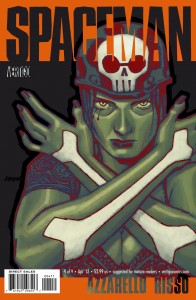 It’s been two full months since the last issue of Spaceman was released and I still haven’t gotten it out of my head.  We were left in shock as Orson’s ragtag group of friends discovered Tara, the kidnapped child star, in his possession.  This issue raises the stakes for poor, ignorant Orson and raises the bar for all the issues to come.  Not only is Tara still being tracked down by police officers and a ruthless bounty hunter, a new threat has entered the fray – Lilly, the virtual prostitute of sorts who Orson was close with, caught a glimpse of the reality TV star last issue and immediately saw the dollar signs.  Orson has another revealing flashback of his life on Mars where he and his fellow spacemen try to decide how to sneak the gold they discovered back to Earth.  We also see the first mention of the event that put the Earth in its sad state, the Rise.  Perhaps global warming melted all of the icecaps and caused the sea levels to rise?  One could only guess what Brian Azzarello has conjured up.  The bizarre language is still very present in the book, and it’s interesting to note the differences between the way that Tara and her well-off parents speak and the speech of everyone else.  The language spoken by Orson and his friends seems to stem from a lack of money and education instead of my initial impression that it was a new form of speech inspired by texting syntax.  The world of this comic becomes more and more fully realized with every new issue and it’s impossible not to be completely immersed in it. 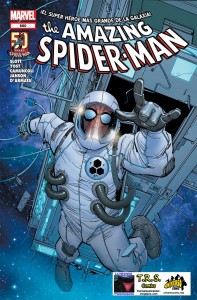 If I didn’t know any better, I would say that writer Dan Slott is on a serious science fiction high right now.  First he sends Spidey on a wild time-traveling adventure and now he has the wall-crawler heading into outer space.  After J. Jonah Jameson’s astronaut son loses contact with Horizon Labs, Peter Parker does the only sane thing…tracks down his Fantastic Four pal Johnny Storm (the Human Torch), hops on a rocket and blasts off to the rescue.  It’s a bizarre idea for a character that’s not Superman, but Slott isn’t known for being exactly orthodox in his storytelling.  Once above the earth, the duo encounters a whole lot of Octobots and space zombies.  The banter between Johnny and Spider-Man is sometimes funny but more often not.  The scene with Johnny singing and dancing Tom Cruise-style to the sorry excuse for a song “Friday” really shouldn’t have worked, but Slott’s characteristic charm had me smiling in spite of myself.  More successful, though, was the Terminator quote delivered by John Jameson which showed beyond a doubt that Slott and co-writer Chris Yost are having a blast with the sci-fi angle. Despite (or maybe because of) the over-the-top ridiculousness of this plot, I recommend grabbing this book.