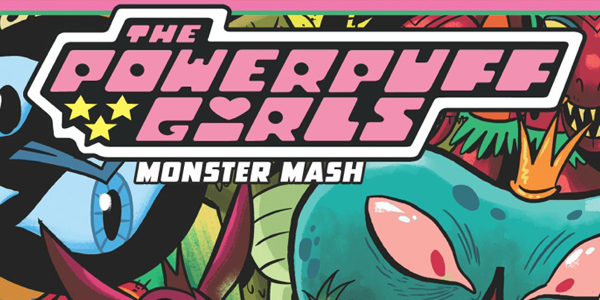 IDW’s Powerpuff Girls series has been a pure delight ever since the Girls popped back onto the comic scene in late 2013 (there was a Powerpuff Girls series released by DC Comics in the early 2000’s). The series is the perfect representation of the characters and the tone of the much-loved cartoon. Because of this the comics, just like their animated counterpart, are funny yet appealing to all ages. Powerpuff Girls: Monster Mash is no exception and is an impeccable collection of one of the best licensed comic series on store shelves today.

Powerpuff Girls: Monster Mash collects issues #7 – #10 of the ongoing series. The four issues cover two stories – the titular tale, which features the Girls trying to stop the denizens of Monster Island from having their annual Monster Mash Party ON Townsville, as well as one with the Girls going to see their favorite boy band only to have to contend with the Boogie Man and the Rowdyruff Boys – are all-around fun colorful yarns that feel like you’re reading a cartoon.

Derek Charm does an incredible job on art and story for the titular tale, with dead-on characterization, great watercolor-like backgrounds that look like they were pulled from the animated series, frenetic action, vibrant monsters, and on-point humor and pacing. I haven’t seen a lot of Derek Charm’s work but I must say that I am truly impressed and will keep my eyes open for his creations in the future. Regular series artist and writer Troy Little helms the second story and continues his stellar work with the Girls. His writing really shines, showing a passion for the people of Townsville and their protectors. Little knocks the look and feel out of the park as well, weaving together a story that utilizes two villains to great effect while peppering in the Powerpuff Girls‘ trademark humor and quirkiness.

If you are a fan of the Powerpuff Girls cartoon series and have yet to try out the current IDW run you will not be disappointed when you pick up Powerpuff Girls: Monster Mash. It’s easy to jump into, immerse yourself, and just have a grand old time with some old friends. Rarely do cartoon-based comics work out this perfectly.