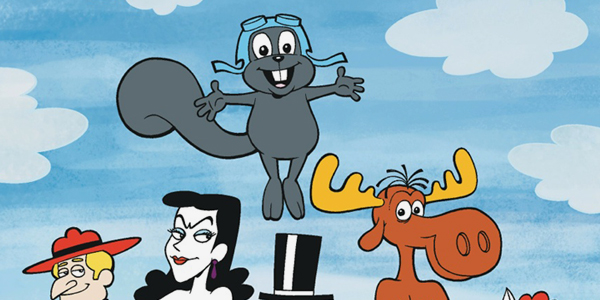 Rocky & Bullwinkle are back and in classic form – which, depending on who you are, is not necessarily a good thing.

When IDW Publishing announced plans to bring Jay Ward’s iconic characters Rocky & Bullwinkle, Mr. Peabody and Sherman, Dudley Do-Right, and others back to the printed page in an all new slate of adventures in 2014 I was initially optimistic. I had been enjoying IDW’s new Popeye series at the time, a series which waxed nostalgic in all of the best ways while making the spinach-eating sailor resonate with today’s audience. Because of this I felt that if anyone could make these classic characters work for today’s readers IDW could. My optimism however, soon wavered due to one simple fact: Rocky & Bullwinkle is not everyone’s cup of tea.

Rocky & Bullwinkle: Moose on the Loose collects issues #1 – 4 of the regular series into a vibrant and colorful package. The stories, penned by Groo the Wanderer and Garfield & Friends writer Mark Evanier, are all good clean fun. Evanier is obviously a fan of these characters and Jay Ward’s work because all of the stories maintain the humor and characterization that fans of these cartoon cut-ups are sure to love. The villains – Boris and Natasha, Snidley Whiplash – are exactly like their cartoon and classic comic book counterparts. Roger Landridge – the artist of this collection and the artist/writer of the aforementioned Popeye series – does a great job bringing this menagerie of characters to life. His art captures every little nuance and quirk of Bullwinkle, Rocky, and Company. The love for these characters that both men have can clearly be seen throughout this cadre of tales which range from fortune-telling scams to moose and squirrel on the moon, all done in the staccato style that the classic cartoon series is known for.

Problem is this isn’t really a good thing.

The stories in this collected edition are too much of an homage to the original material. Evanier plays it straight, meaning that the humor and tone of each story are exactly like the classic Rocky & Bullwinkle cartoon and comic material. Because of this the stories in this volume suffer from the same pitfalls as their predecessors: they are not everyone’s cup of tea. Humor this dry needs to be spruced up for today’s comic-reading children. It doesn’t need to be slapstick but it does need a little more oomph than these stories offer to appeal to a wider base of readers than the old guard and their assorted children and grandchildren.

Regardless of its widespread accessibility Rocky & Bullwinkle: Moose on the Loose is a grand helping of good clean fun. Those who love the iconic moose and squirrel will find themselves engrossed in the stories, humor, and the wonderful art that this collection has to offer. Will this be grabbing any new fans? No.

But does it really have to?