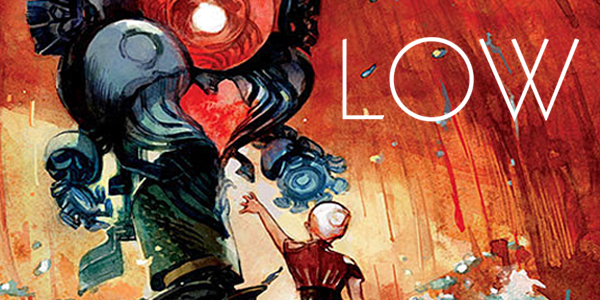 Life is much deader, down where it’s wetter, take it from me…

New from Image Comics comes Low #1 the story about future life under the ocean. The story is written by Rick Remender with art by Greg Tocchini. Under the cover, you’ll find a provocative story full of underwater adventures, improved Bioshock style diving suits that run off bio-metrics and some tasteful sideboob.

Low #1: The Delirium of Fate starts out with some scary ass stuff. We see what looks to be a skeleton man in a diving suit climbing to the top of a ridge. He lights a flair and throws it back the way he came, which ends up beautifully blending into the title page. I really appreciate when artists take the time to creatively add the book’s info, and not just have it on its own boring page. Also, keep this guy in mind, you’ll see him later.

After the title, we meet two of the main characters in the book, the married couple of Johl and Stel Caine. They’ve just finished some morning coitus action and are discussing the day ahead. Johl is the last great helmsman of Salus, which is to say he fishes for giant squid using a hi-tech diving suit called a helm suit. Salus, the city they live in, is located on Earth in the distant future. The inhabitants survive with the help of people like Johl, going out and collecting food for the masses. The Caines have three kids, two daughters names Della and Tajo and a son named Marik. Johl has promised to take the younger two daughters out on the hunt for the first time today, but their mother is contesting. The two compromise on the notion that if the girls remember on their own, without Johl’s encouragement, then they are allowed to go. Throught this entire interaction, both parties are nude (or pretty close to it). Tocchini practices some Austin Powers  type flair for making sure a light glare or some other type of scenery manages to block any inappropriate bits from view. What’s left is a tasteful scene of a married couple engaging in a very natural feeling conversation.

The Caines also give some backstory on how Salus came to be. The sun is expanding, and life on the surface of Earth ceased to be a viable option. So society moved underwater and built a massive city, protected by radiation shielding. Stel maintains that this is only a temporary fix, and that eventually, they will need to find a new planet. There are probes searching the galaxy for habitable planets, and after some few thousand years, it would appear a probe might have located an hospitable planet. Too bad it takes ten years for the probe to make it back to Earth with the details. We also get introduced to just how big a society Salus is. Stel pulls the curtains back to reveal a futuristic city with skyscrapers and flying boat-looking ships.

After the Caines prepare themselves for the day ahead, they are met by their two daughters. Turns out Johl was right, and the two girls are beyond excited about the upcoming fishing adventure. Stel submits and Johl walks the girls around for a history lesson in preparation of their trip. We get to learn more about how the civilization came to be, under the sea. Johl decides it’s a good time to pass on a gift he received on his first hunt. He gives each of his girls a magical glowing shell. The trick is the shells will continue to glow, as long as the owner is being true to themselves. We also get to meet their son Marik, who lacks Johl’s drive for hunting and killing. Marik is the oldest, but prefers to stay back and work as the family mechanic. When we meet him, he’s fixing up the hunting ship and cursing up a storm. After some dialogue between all the Caines, we finally get to see the helm suit. These too have been past down from generation to generation, and are specially designed to only operate for someone in the Caine bloodline. Johl tells the girls that eventually, it’ll be one of them that gets to wear the suit someday.

Finally, it’s hunting time. The ship, piloted by Stel Caine, makes it’s way from Salus and out into the open waters. We get to see the city from a distance, and see all the depth charges that float around it’s perimeter as protection. It’s not long before the team spot a mammoth, which is a giant squid. The team prepares to strike, but it’s no luck. The squid is a trap and they’ve fallen right into it. That skeleton guy from the beginning of the book was a scout, and he has the Caine’s ship dead to rights. A much larger vessel attacks and begins to board, and it’s not long before the Caines are taken captive by the Savages. Ultimately, it’s the helm suit they’re after. Despite the suit only working for someone in the Caine bloodline, it appears you don’t actually need blood to operate it. All you need is a retina scan, so the head savage takes one from Johl. The book ends with the Savages making off with the helm suit and the two Caine daughters, leaving Johl and Stel beaten and brooding.

Low #1 is a page turner to say the least. Each new panel brings with it a dazzling landscape of futuristic innovation. The people are striking and sincere, and the story is engaging and entertaining. What really strikes me about the story are Tocchini’s illustrations. His panels come to life with vibrant colors draping the thick black line frames of the figures. The final effect is a watercolor feel with soft blending yet dynamic ranges of colors. Low #1 is a solid first offering that has me hooked for the rest of the series.