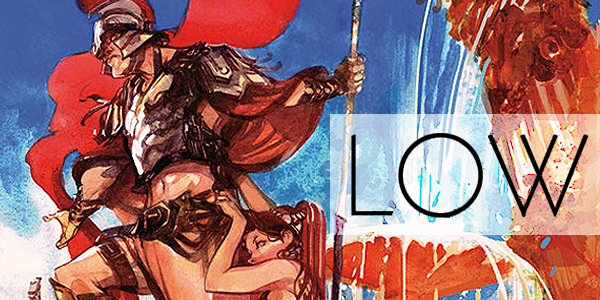 Her daughters were kidnapped, her husband murdered and Stel is left alone to watch the world around her deteriorate.

New from Image Comics comes Low #2 the story about the futuristic world or Salus, set at 20,000 leagues under the sea. The story is written by Rick Remender with art by Greg Tocchini. Ten years have passed between the first and second issue. Stel, the main character, is trying to cope with having her daughters kidnapped and her husband murdered as she watches the world around her start to crumble.

Stel is really an interesting character. She has a Mrs. Brady style positivity about her, that persists despite the conflicts that are thrown at her. We find her early on pacing the room that she shared with her husband in the first issue. She’s paralyzed by photos of her family, equating seeing their faces to pulling the scab off an emotional wound. It’s clear that she’s finding it hard to move on, but suggests that her oldest son Marik has been the hardest hit.

We catch up with Marik on the following page. Gone is the young, good hearted mechanic that was content working on the family’s vessel, and what stands before us is a Roman centurion really giving it to woman, next to a fountain. Brief note, I really liked the typography of the title being spelled out by water spilling over the side of the fountain. We quickly learn that this feels wrong because it is wrong. Marik is using “heavy cream” which is a very effective hallucinogenic, and when his high fades, we see that he’s wearing a guard’s uniform and fornicating with a woman of ill repute. The two finish their session and Marik goes to continue his day, ignoring the calls of the woman who just serviced him. As she is berating Marik about how she doesn’t run a sex tab, he gets a call from his mother Stel.

We can see Stel is desperately trying to hold on to her remaining family the best she could, but Marik seems to be pulling away. Just the attitude change between the first and second books alone shows how affected by the event Marik is. Stel tries to reason with Marik to come home, being that today is the anniversary, but he declines, saying work is his first priority. While this conversation is happening, the prostitute has gone for some help for her lack of payment. Out walks Pall, a big ass pimp, who is slowly walking behind Marik, pistol drawn. Marik delivers some very striking info right before he hangs up with his mom. He states that within a year, all the air they’re breathing will become too toxic to sustain life. The sarcastic bastard in me loves that he calls it good news. Marik is forced to end his call abruptly as a shot rings out behind him. Thanks to his cape, he’s able to dodge and deliver some return fire, to which Pall eludes by using the girl as a human shield. She catches a couple rounds with her brain and chest, and is left a crumpled corpse. Pall starts to flee, causing Marik to chase him, and the story jumps back in time ten years to see the last time Stel ever talked to her husband Johl. We don’t get a lot from this interaction, other than how much they loved each other, and how Johl thrived on Stel’s prevailing optimism.

As Johl passes, we jump back to present and find Marik flying the captured Pall through the city. Pall squawks about how he’ll squeal if Marik takes him to prison, to which Marik replies that he has no plans of bringing him in. While this is happening, Stel goes to visit a man that few people go see these days, a man called Masaje. Masaje exists in a plane of pure white. The panels are void of any background imagery yet both he and Stel are able to sit on a ground that isn’t visible. Masaje tells Stel a story of a man that prevailed due to his determination, and how the man would have failed if he was crippled by his fear. The words seem to help a little, but not nearly as much as the news that is waiting for her back at her lab. Before we learn about that, we see Marik reach his destination with his prisoner. Pall pleads for his life as Marik drags him towards a cliff, and positions him in an execution stance. Stel gets her good news and tries to call Marik while he’s in the middle of this. Good thing he didn’t answer, because he has a lot more than a rough neck pimp to deal with. As the book closes we’re hit with three shocking bits of info. Marik is surrounded by a swarm of officers, and he’s being arrested for murder, we get a quick look at the monsters that stole away the Stel’s daughters, and finally we learn that there’s still some hope to be fouund. The probe that Stel launched in the first issue has just returned with news of an inhabitable planet.

Low #2 is another suspensefully fantastic offering from the mind of Rick Remender. I was apprehensive about how much time had passed between issues and how much some of the characters have changed, but it’s intriguing to see how the pieces might fit back together. You gotta suspect that at least one of the girls is left alive, especially given that we see a beautiful looking woman adorning a helm for the teaser cover of Low #3. Greg Tocchini’s art continues to look futuristic and fluid. The color tones all fall on the same spectrum, allowing the pages to harmonize beautifully with one another. At times the outlines get a little dark, but it fits well with an underwater environments devoid of natural light. I’m fascinated to know how the Della and Tajo will play back into the story, and if Stel will ever get to breathe the air of her new inhabitable planet. Basically, what I’m trying to say is I’ll be rushing back to the comic book shop on September 24th for the third installment of Low.