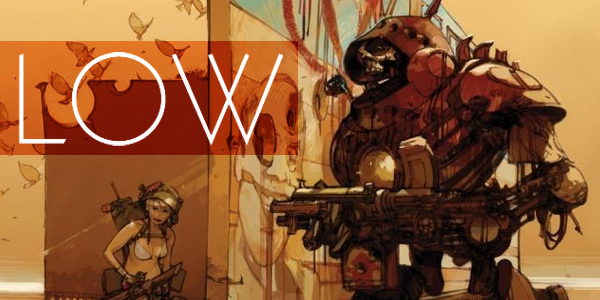 Low #4 struggles to fight that sinking feeling with prevailing optimism as Stel and Marik finally make it to the Third City.

Last week saw the newest issue of the underwater thriller released by Image Comics. Low #4 is written by Rick Remender with art by Greg Tocchini. In the last issue, we left Stel and her son Marik swimming amongst a plethora of exotic sea creatures, as they made their way to the reputed Third City. However, they had a limited supply of oxygen, and as issue four starts, we find the pair on the brink of death.

Marik said this would happen, luckily he isn’t conscious to see it. We’re hit with a frantic five panel flurry of Stel moving in and out of consciousness, spending time seeing her deceased husband. She is still mostly with it though, determined to find the city that is rumored to be gone. She’s forced to pull Marik’s lifeless form along as she begins panic fights to set in. I enjoyed watching the internal struggle in Stel, whose thoughts were filled with doubts, but never let those words hit her lips. Stel’s prevailing optimism carries her through, because with a turn of the page, they find themselves inside an air vent. From here, it’s a short swim to a hatch and they’re in the third city, able to breathe without the use of their suits.

On the following page, we’re thrown into a scene reminiscent of the upper echelon of Salus from the previous book, but with way more variety of creatures. This underwater Tattoine is filled with sharks in bowlers hats, midgets smoking pipes and rampant nudity. I especially like the remark about the fishstick stink right before the midget gets thrown off the balcony. Stel and Marik disguise themselves in some conveniently discarded clothes, then venture off to to find a ship to take them to the surface. Once past the man with a monkey reaching into his hind end, we’re taken to the battle arena where hordes of soldiers prepare to take on a menacing monster crab. Emcee to this show of slaughter is none other than Roln, the man responsible for Johl’s death, the girl’s kidnapping, and pretty much everything bad that’s happen to poor Stel’s family. Her attention now rests solely with him, despite Marik’s concern.

We get a glimpse at what Roln is to his people. He reminds me a little of the Governor from The Walking Dead in that he wants what’s best for his flock, regardless the cost of human life. On top of controlling the Third City, he also has a much older Tajo chained in a room under Johl’s helm, which stands as a trophy in his personal quarters. Tajo, after being kidnapped, is either experiencing Stockholm syndrome or has truly bought into what Roln is selling. Either way, he has control of her and the helm when Stel finds him.

It took Stel ten years to find the filth that took her husband’s life and stole her children away, but now she has a chance to run the bastard through. With a SHUUK! it would appear she ends the suffering, but the jerk doesn’t have the decency to die. Roln shakes her off, then acts to strike Stel down when Tajo jumps in to save her. Tajo convinces Roln that she’s of use, so instead of killing Stel, she’s instead taken down to the pits. From here we’re taken through a bunch more orgy scenes showing Roln living it up with his men while taking the reader through how he and his scary skeletal brother came to be.

While the party is going down, Marik is able to sneak into Tajo’s room while she’s sleeping. The two hug then figure out a plan to get out. Across a cool looking spread layout that has Tajo and Marik descending a spiral staircase, Tajo learns that Marik thought she was dead, and that it’s simply by chance that they were able to find her. One look at the way this news hits Tajo and it becomes clear she’s had a change of heart about her escape. It’s when Marik goes to take out one of the guards that she does anything about it. She smashes a statue over her brothers head and taunts him as he lay there. Her family might as well have been dead all along.

Rick Remender is writing some really great stuff in this Low series. It’s dark and devious and has me trying to figure out just how bad these people got it. For someone as optimistic as Stel, it’s a little heartbreaking to see her plight. It doesn’t help that Greg Tocchini is drawing these super expressive panels chock filled with sexual tension and fluid lines. With a title like Low we’ll have to brace to see how far down things can go for Stel and her son when Low #5 comes out December 10th.