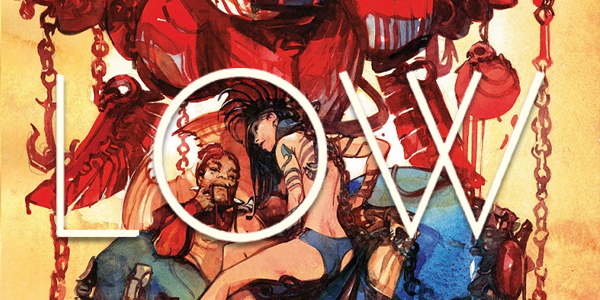 Image Comics tests how Low can we go by flooding Stel in strife.

Image Comics published Low #5 by Rick Remender and Greg Tocchini earlier in December, which is the next to last issue in the series’ first arc. We follow the character of Stel Caine as she tries to retain her optimism against very daunting circumstances. Four months have passed since she and her son Marik were imprisoned by the same man that murdered her husband and kidnapped her daughters. Thus far this series has been appropriately named, because we watch Stel sink farther and farther and she holds onto hope for saving the entire planet.

The Skinny
Four months a prisoner has Stel slightly doubting her optimism. If you’ll remember from the past couple issues, Stel got word that a probe has returned to the planet’s surface, possibly with evidence of an inhabitable planet. Now Roln knows, and he’s going to push all of her pressure points until she cracks. While she’s been imprisoned, her son Marik has become quite the star in the arena, however this may or may not be thanks to Roln. As a final push by Roln, Marik and his team of mutineers must fight a pair of giant beasts while Stel is forced to watch. Stel also gets the opportunity to try and reconnect with her daughter Tajo, who has been brainwashed by Roln, but his hold proves too strong. We see Tajo chuck the shell necklace her father gave her and put her blade to her mother’s throat. Roln stays Stel’s execution for the time being, forcing her to watch the fight, and quite possibly the death of her only son by the hands of a traitor or the tooth of a beast.

The Good
Tocchini is KILLING IT with the artwork. There is just enough detail in every panel to immerse yourself into the underwater world they live in. Like when they open the doors to the arena, you can almost feel the rush of water go by as Marik proves his mother’s optimism is contagious. Also the faces are so lifelike, as seen in Tajo’s facial expressions. The turmoil on her face reminds me of days spent arguing with my sister, and the rage that could result. I also really like the expressions Grolm was able to show, and it was nice to learn he’s more human than his skeletal appearance would lead you to believe.

The dynamic between Tajo and Stel is gut wrenching. I felt like I wanted to reach through the panels and shake Tajo. Don’t you remember your mother!!! But no, Roln’s turned her into his spitting image. Also, Marik continues to be the most complex character, going from sweet young man to dirty, whore-banging cop, and now he’s a champion arena fighter with the ability to lead a small group of soldiers. The other daughter, Della, is again teased in this issue, but the phrasing changed. In the last issue, it sounded like she was alive somewhere, but when Roln says something to the extent of “you’ll never learn what became of your sweet Della” it makes me think that she is no longer amongst the living. Either way, it’s one more small thing to root for in an ever worsening situation.

The Not-So Good
A good chunk of time passes between books, with the evidence usually being seen in the faces of characters like Marik and Tajo, but Stel never seems to change. Everyone else makes a lot of progress with their personalities or even their physical appearance, like Marik sporting a handsome goatee and finding some of Stel’s hope. I also think that Roln is was more devious than the way Remender wrote him. I feel like playing the slow game of trying to find the probe’s location would waste too much of his time and resources, and instead he would have resorted to tactics closer to what was in the CIA Interrogation Report. However, due to this being a story and all, I can understand that most people wouldn’t want to watch the beautiful Stel being waterboarded. Can you even waterboard underwater?

The Decision
Low is suspenseful and engulfing. The Caine family has seen such great struggle that they become the perfect underdog to root for. There’s lessons on how to improve your life hidden in the characters dialogue, especially Stel and her never failing positivity. Remender writes this family in such a way that I can’t help but hope for them to reunite and best their captor. I’ve already told you how great this series looks, but I don’t mind giving Tocchini a little more props, because it’s that good. Admittedly, I had forgotten about the shell necklace Johl gave to Tajo, and with it falling right next to Marik in the closing panel, I wonder what great role it will play with the next issue. Also, being that the next issue is the end to the first arc, I can’t help but suspect that Marik’s brothers in arms will assist Stel in besting Roln, with or without Marik, but I fear Tajo may never be saved. If you’ve fallen behind on this series, now’s your chance to catch up, because Low #6 isn’t out until January 21.