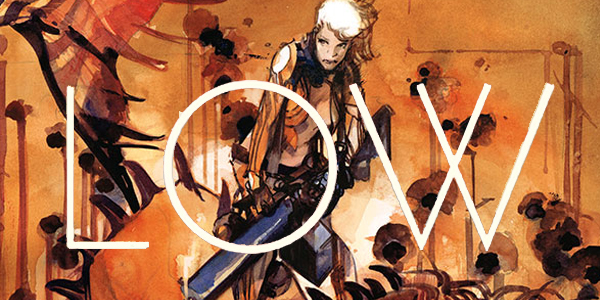 The helm suit. No longer a decoration. Now used for decimation.

Low #6 from Image Comics concludes the first arc, and sees a lot of action in these blood soaked pages. The series is written by Rick Remender with art by Greg Tocchini. We pick right back up as Marik Caine fights for his freedom, and ultimately, his life.

The Skinny
At the end of the last issue, we left Marik in some hot water, but he’s able to help himself, through the use of a family heirloom. This pisses of Roln, who takes action against Marik, setting off a chain of events that all lead up to the helm suit finally coming back to life. It was a hell of an issue, and an epic way to end the first arc.

The Good
The art in this series has been the driving force keeping me connected to this series. I love Tocchini’s style and attention to detail. Every character in the panels, including the background characters, all feel fluid and life like. There’s not an awkward or stiff pose in the whole book. Fans of this series should expect the tragedy that happens, but it’s all worth watching when the red flows and the suit goes live. I also really liked seeing Stel lay the hammer down.

Not So Good
Damn it guys! Stop killing off all the characters I like. Remender reminds us not to get too attached to any character, but I still need to whine about how it went down. Marik turned into a serious bad ass, able to fend off waves and waves of enemies, but he’s taken out by some cheap shot? Boo! I wish they gave him a fighting chance. Poking people’s eyes out…ok that was pretty cool.

The Decision
With Tajo getting her free will back and a new found purpose, I am very interested to see what lies ahead. It should be interesting if we get two POV characters and get to watch as Stel makes for the surface while Tajo heads for the deep. It just makes me wonder if this is the last time the Caines will meet. Either way I’ll be back for more when Low #7 initiates the second arc.