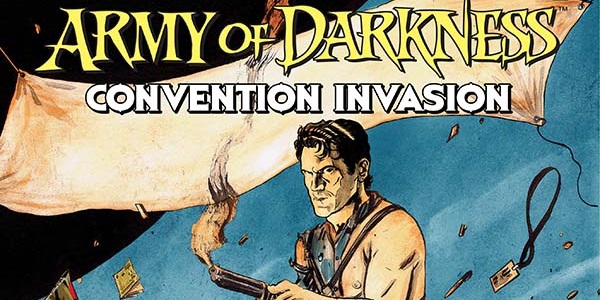 Ashley J Williams has faced the Army of the Dead, a bad version of himself, and even the very incarnation of evil itself, but how will he fare when he comes face to face with his greatest challenge yet? His own fans. 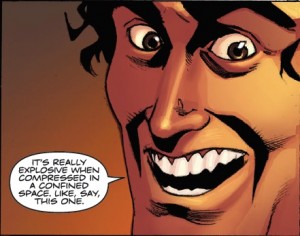 Bruce Campbell and Sam Raimi first burst on to the scene back in 1977 in an explosion of blood and gore that they called The Evil Dead. It was met with mixed reviews from the general public, but found real life on home video, and in grindhouse theaters, helping to uncover the under-audience of film appreciation and earning it’s cult-classic status. This new-found audience actually ended up being one of the reasons that Bruce and Sam decided to do it again with the Evil Dead II ten years after the original, but this time they decided to incorporate more comedy elements with the horror. Evil Dead II ended up being another cult success and led to the production company doing a full on horror/comedy/action movie centered around Bruce Campbell’s character of Ash traveling back to the middle-ages to fight the horrors of the Necronomicon. Army of Darkness released in 1992 and even with a bigger budget, and a new ending to gain mass appeal, still ended up falling on deaf ears when it came to the general public. Soon after though, it became yet another cult-classic thanks to home video sales, and made it’s star and his character both horror icons that have become staples on the convention circuit. Now, if you know anything about comic books, horror movies, or attend any sort of convention you know exactly who Bruce “Don’t call me Ash” Campbell is. So this setting, while seemingly random, is the perfect battleground for Mr. Williams and the Army of the Dead that seems to follow him around.

Seriously!? A great close up ruined by a typo! What do people have against proofreading, nowadays?

If you’re writing any Evil Dead story there are a lot of dos and don’ts, but it all boils down to being able to capture The Evil Dead’s, or one of it’s sequels’, tone. It’s actually a lot harder to do than one would think, and not a lot of Evil Dead or Army of Darkness stories fare well in this department. Luckily this is one problem that Army of Darkness Convention Invasion ends up avoiding. Michael Moreci has a good grasp on the source material, and ends up capturing not just Ash’s but the story’s personality as well. The only problem is that when you have an overwhelming presence like Ash dominating your story, the inclusion of other characters just feels flat in comparison. Ricky and Darren and Hope are so incredibly overdone that I frankly wouldn’t be surprised if you forget their names (I did). So this is very much the Ash show, and it’s a good thing that it’s a good one. He fights, he banters, he’s surprisingly resourceful. Everything that you love about Ash is on display, so it’s entertaining. Unfortunately he overuses his lines from the movies a little too much, and his quirks of speech seem unnatural in context, rather than characteristic. However, the scene involving Ricky, Darren, and Hope trying to explain Convention culture to Ash is a definite highlight that, unfortunately, doesn’t last nearly long enough considering how funny it is. I could probably read an entire comic about someone trying to explain a tabletop RPG to Ash, and not get bored.

But Evil Dead is action and comedy. Luckily, that’s where the art really shines. It’s got smooth choreography and some sweet fight scenes. Brent Peeples’ pencils and Alex Guimaraes’ colors are perfectly aligned with each other, as all the scenes are surprisingly diverse in tone and lighting. They both cover the action, comedy, and even the supernatural elements with real proficiency to create a multifaceted world with a lot of themes and influences. Brent Peeples even saw fit to include little nerdy Easter eggs in the background that will be familiar to convention goers, fans, and appreciators. They clearly know their audience, and how to appeal to them. In fact, the only thing that could be considered a negative critique of the art is the complete lack of horror elements. There are multiple surfaces that are well represented, with appropriate changes in texture between the human characters and the deadites, making sure everyone knowing who the good guys and bad guys are. But these changes are purely surface level though, and never really convey horror to a satisfying degree.

Army of Darkness Convention Invasion is still a competent Army of Darkness story with some decent art that captures the source material, but as a whole doesn’t do anything truly groundbreaking or even all that interesting in it’s 48 pages. It has a promising start, but wraps up in a hurry and a little too cleanly, It’s still entertaining and has some decent action and dialogue, but it’s just sort of flat and a little too familiar. If you’re a fan, you’ll find what you’re looking for because it’s most definitely for you. But for the general public, it’ll no doubt fall on deaf ears yet again.