Alright Arrowheads, we’ve still got one week until the new season premiere “The Calm”.  In the meantime, why not catch up on the events leading up to it, in Arrow Season 2.5 #3 from DC Comics!

Here we are, back on the pages of the Arrow Season 2.5 miniseries. Let’s regroup for a bit. SPOILERS FOR #1&#2 (but if you clicked on this when you aren’t caught up, you only have yourself to blame.)

Roy’s been shot, and is unconcious.
Blood’s back in power (or someone masquerading as Blood)
and Oliver’s shoulder is dislocated

Really all you need to know to jump in to this volume. 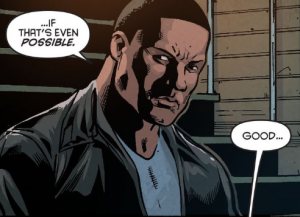 Let me save you some time…this *is* Diggle

This volume is important because it’s starting to introduce plot points and issues that are going to be playing in to Season 3. The last volume did that as well by revealing what happened to Officer Lance, but it’s not really the same thing since we know how he comes out after watching the Season 3 trailer from a couple months back. What immediately endeared me to this volume was the fact that Marc Guggenheim is so focused on letting us discover Oliver’s world bit by bit. He introduces these key devices that serve to not only reveal a little more about Oliver’s (and his allies’) psychology, but his methodology as well. Case in point, issue three actually reveals the face behind all those wonderful toys that Oliver loads his quiver with. It’s not that this information is needed, since the main audience is in it for the action (and a subset for the romance), but it serves to better flesh out the character. Simple things, like watching our heroes actually go through steps to acquire their arsenal (pun! or…it will be…), or talk, plan, research, and train creates the precedent that the heroes’ abilities need to be grounded before becoming important to the plot (shark repellent…). It may seem small, but details like this are the reason that “realistic fiction” has been so popular as of late. Everything that happens in the comic (just like the show) has already been determined via exposition or has had enough time in gestation to be realistic (parachute arrow, boxing glove arrow).

There is where we see Arrow #3 at it’s best. It’s very small as far as story goes, but the fact that a little thing like acquiring arrows (and another interesting item…) is granted the same number of panels and time as a big fight on a rooftop shows how important characterization is to Marc Guggenheim. Other than that, it’s retreading the same ground. Oliver and Felicity talking is an entertaining distraction that still remains relevent in relation to the plot, there’s a villain to fight with some impressive visuals and choreography. It feels cheap to say “You read the last review? Same strengths, same weaknesses.”. For the most part it’s true. Quality dips in the art for women (and Diggle for some reason…) are still prevelant, but not nearly as bad. It’s a well built (from a narrative standpoint) volume with a nice surprise that’s ties directly in to the show, but beyond some important character building moments, it doesn’t do anything really outstanding. Still, it’s solid and has cool art that shows some prime superheroin’, if you’re a fan, and you aren’t reading this series yet, I can honestly say it’s a faithful tie-in with a lot of talent behind it, and you’ve spent ninety-nine cents on way worse.