Cheesy dialogue, an anticlimactic fight, and timing that’s just a little too convenient all hold back this volume of Arrow Season 2.5.

The Blood arc hasn’t been the very best Arrow has to offer, and #6 finishes it up on sort of a down note. Mechanically, the story is sound; but things get a little too convenient to be kosher, and cliched lines make a potentially dangerous enemy incredibly goofy by Arrow standards. The villain spends most of his time spouting bible verses and religious prose, and Oliver spends most of his time not hurting people. Not a great way to spend a volume. The coincidences pile up a little too much, leading the story in to writing-crime territory by depending heavily on deus ex machina to move things forward. #6 puts three huge moments of convenience right next to each other. It’s too bunched up to not notice, and it replaces the usual questions of “How are they going to get out of this?” with “How did they hide in there?” and “How did they know exactly where he was going to be?”. It’s a distracting enough detail to question the integrity of a story that tries to keep everything realistic (in a manner of speaking), and that’s essentially where it all sort of falls apart. Brother Blood proves to be more bluster than brawn, and sort of fetters out in such a weak way that it makes any suspense beforehand mostly worthless.

The art is still solid, and the few action scenes are easy to read and fun, but the narrative is an absolute nightmare in regards to the pacing. Any attempts to build up intrigue are killed by limited time and space, so none of the danger has any impact. It’s kind of dull and the bad guy’s plan is hilariously formless and ill conceived, but the Suicide Squad side note keeps things interesting by finally starting to give this part of the story a form worth looking forward to. #6 is supposedly the end of the “Blood” arc 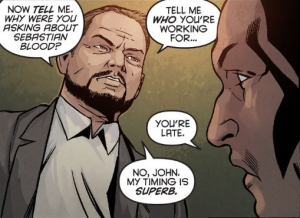 of Arrow season 2.5, but the cliffhanger ending kind of makes you wonder when they were planning to end it in the first place. It’s still Arrow, so everything you like (minus Felicity) about Arrow is there, but they seem to be leveraging some of the most notable moments and characters in the TV series in this comic book. They’re way too significant to not get a mention in the new season, but it hasn’t come up at any point. It’s not a deal-breaker, but the fact that it’s not even touched upon that makes it seem kind of pointless to read, and #6 doesn’t present a strong enough case to convince the audience to go all the way through Season 2.5.