Arrow Season 2.5 #8 dials down the drama to fit in some much needed banter.

Arrow Season 2.5 #8 opens the absolute best way an Arrow story can open. Felicity talking to herself.(This is the way you do exposition! You make sure the audience is too entertained to know that they’re being informed about the plot!) It’s a bit silly, but after how heavy the last issue got, “a little silly” is a welcome variation in formula. Though Oliver remains…indisposed for a significant portion of it, this volume still has plenty of witty trade-offs (even in the face of true peril) between Dig, Felicity, and returning champion Sara. That’s right, despite her unfortunate case of…death in the series, the comic book prequel decides to feature her character in a sufficient co-starring capacity that serves to remind the readers of the true loss of her character, and how much her presence added to the show. It’s heartbreaking, but at the same time it’s a fitting tribute to see her in a fully natural setting, sparring verbally with friends (it’s still really sad though). And that’s pretty much what makes the volume so good. There’s some action, and some intrigue, but mostly it’s Team Arrow talking about what’s already happened and commentating on future moves. And it’s absolutely perfect! The characters are clearly written as the actors portray them, rather their script versions, so there’s a definite connection to the show. Sara has a great part with a lot of sound synergy with the team, and conveys varying chemistry with each member. My only complaint would probably be Craig Yeung’s art occasional tendency to fail to portray female characters in a flattering light (very occasional). 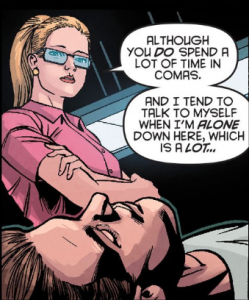 best when things don’t get too serious, and even the moments that should be overtly dire are approaced with a tongue-in-cheek mentality (Sara coming down the stairs with Diggle and then Oliver is actually pretty funny). Of course there’s still emotion and action, and even a pretty tense closing that sets up the next issue, but all of that takes a backseat to just good old fashioned banter and exposition (I’d be remiss if I didn’t praise the developing Suicide Squad mini story forming in the back, for bringing back two of their best). Regardless of whether you watch the show, read the comic, or maybe even do both, Arrow Season 2.5 #8 is for fans of the characters. It’s the most faithful and flattering portrayal of the notable chemistry between Oliver, Dig, Felicity, and even Sara, making it the most appropriately conveyed interpretation of them in Season 2.5, thus far.