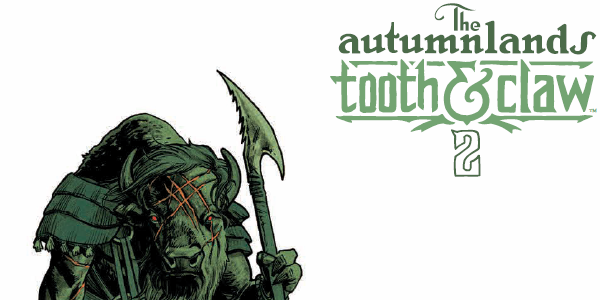 The Autumnlands: Tooth and Claw #2 has the same great quality of art and scripting as the first, but this time things have gotten a little bit more wild. 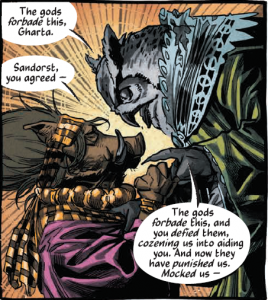 After the catastrophic events of Tooth and Claw #1 it’s only fair to assume that now things will have changed significantly for the sky-dwellers. Without the protection that the city of Keneil offers, the wizards are finally experiencing the true brutality inherent on the ground below. The reality check of the wild is just as evident to us as it is to Dunstan. We understand based on the naivete he displayed in the last volume why he’s so shocked to discover the savagery that the ground animals are capable of. What’s more, it’s a jarring realization of how fragile their perfect lives actually were. Since the driving force behind the first volume was focused on revealing the idyllic existence the characters had before the crash, it makes the sudden loss of all that apparent to the audience as well. The impact (no pun intended) is felt because we have experienced firsthand what things used to be like. It’s tragic and heartbreaking, made all the more so by Dunstan’s desperate and impotent proclamations of not understanding. And then, the Champion is revealed, and the blood REALLY starts flowing. I’m not going to give away the identity of the Champion, but I’ll just say that I really didn’t expect it. It’s an aspect of the plot that opens up a lot of different questions, and hints at a much more complicated history than any of the other interpretations of the Time of the Champion have let on.

The Autumnlands Tooth and Claw #2 delivers the goods, and even a few extra bits. Kurt Busiek is putting just as much work in to the aspects of chaos in their world, as he did with the order. Benjamin Dewey’s characters still display tremendously realistic animal traits and nuances, but manage to do so with incredibly human-like personalities. It’s one of the best examples of how to pull off a successful personification of non-human characters that I have ever seen.  Jordie Bellaire’s inks are nothing short of spectacular, conveying both soft and hard forms of light, the contrast of the power behind magic compared to the realism of the rest of the setting, and even the complexity in the colors and hues of clothes worn by the sky-dwellers compared to the simplicity of those worn by the tribe of Bison. Little subtleties contributed from all the different parts of the creative team behind The Autumnlands: Tooth and Claw #2 go in to developing the different twists and turns of their world. It’s well fleshed out thanks to their effort, and it creates an incredibly detailed setting that feels truly complete. But don’t take my word for it. Fans of fantasy NEED to be reading The Autumnlands: Tooth and Claw (formerly Tooth and Claw). If you grew up reading Mrs. Frisby and the Rats of Nimh and Redwall, and watching Bakshi’s Lord of the Rings and An American Tail, this is the extension of that tradition that you have been waiting for.