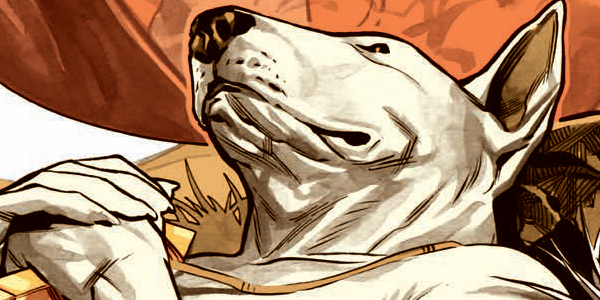 Man, I love fables. Don’t you?

There’s something so pure and elemental to them. The characters all follow fundamental Jungian archetypes that serve as a bases for the their places in the story and how they relate to the lesson; 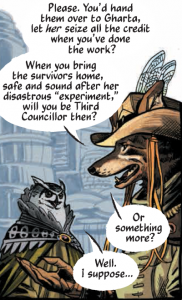 and as 6th grade literature teachers everywhere jammed in to all of our skulls during our formative years, in fables there is ALWAYS a lesson. What makes the Autumnlands: Tooth and Claw so great, is just how well it’s converted this idea of simplistic yet highly relatable personality types from all manner of fables, folklore, and other literature in to a vast and detailed world only made more full by the rich surplus of various sympathetic characters (except Sandorst…).

The Autumnlands: Tooth and Claw #4 reveals even more about its amazing world, spreading out significantly from the destroyed city of Keniel and in to the vast wilderness beyond. Dunstan makes his return as the voice of the Autumnlands, and it’s due to his position as both a newcomer and a naïve personality, that he acts as the ideal proxy for us to view the story from. Most everything new for us is new for him as well, so it’s easy to connect with him on that level. Plus he feels so strongly about all the events around him, making sympathizing with him as a character a relatively simple matter.  Whatever his motivation, whether it be fear of the unknown, the ignorance of battle, and even the simple joy of running through a meadow, we always know exactly how Dunstan is feeling and we’re able to revel in these emotions with him; which once again is enriched by the wide range of facial expressions displayed by each character.

The brilliant portrayal of the setting of the city is just as detailed and perfectly scaled as always, but the grand plains and sweeping valleys of the Autumnlands are immense, varied, and absolutely breathtaking. I could practically feel the crunch of the grass and sensation of the breeze, as a carefree Dunstan raced through the meadow. It was a feeling of immersion that I don’t find often in comics, and it was a welcome deviation that I credit to both Benjamin Dewey and Jordie Bellaire’s idealized vision of pure and untouched nature. This scene in particular is played up even more by the burgeoning friendship between Dunstan and The Champion. It unfolds naturally with the plot though, and never seems to be sudden or ill paced. It acts as the perfect tonal counter to the triple-cross in the making, back at the city, that builds up the suspense and draws the lines in the sand. Kurt Busiek’s literary sense of intelligent design and political intrigue creates dramatic relationships between the characters that utilize the differences in their philosophies to create realistic friction. Th 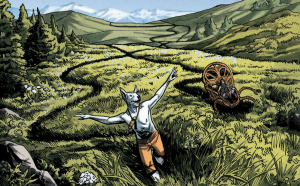 ough some characters’ arcs seem to be simplistic or predictable (cowards, traitors, sages, etc) it serves to bolster the dedication to the fundamentals of telling a larger scale story driven by the actions of the characters, rather than a personal one *about* the characters themselves.

Final Word: The Autumnlands: Tooth and Claw #4 showcases some of the best relationships of the series, emphasizes the differences in the characters without becoming overwhelmingly negative, and builds an impressive setting massive in both scope and dynamism. It has panels comparable to oil paintings, lettering and design that is clean, professional, attractive, and whimsical thanks to John G. Roshell and Jimmy Betancourt, and a plot that shocks and intrigues. Best of all though, its simple and easy to absorb without sacrificing its sense of maturity or intelligence. It’s basically just incredible, and if you aren’t reading this series yet you are clearly insane. I said it before, and it still rings true. The Autumnlands: Tooth and Claw is the very definition of a modern fable.  It’s an absolute must.