It’s the last week of April, which means summer is drawing nearer and we’re about to get inundated by a wave of oppressive heat and superhero movies.  Until then, let’s shield ourselves from the impenetrable cloud of allergens outside by sitting down indoors and checking out some of the best and worst comic books on shelves this week. 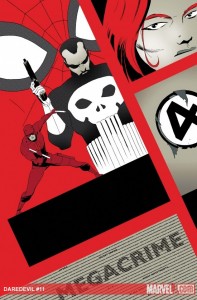 There has been a lot of great Daredevil material to read for the past month thanks to the Omega Effect crossover, which ran through the pages of Avenging Spider-Man, The Punisher, and of course Daredevil’s own book.  Their plan to destroy the drive didn’t go according to plan, leaving Daredevil in a massive crowd of enemies and the drive missing in action.  Daredevil tracks down Cole, the Punisher’s female ally and person responsible for the mission derailing, and uses his devilish charm (sorry about that, had to do it) to get the Omega Drive back.  A lot of the book is actually dedicated to the one-on-one conversation between Daredevil and Cole, but seeing Daredevil actually manage to save someone from going down the dark path that the Punisher chose was great and Mark Waid’s excellent scripting saved it from getting overly sappy.  When all was said and done, not much actually got resolved.  Daredevil is still the most dangerous man on earth, in possession of the most valuable and sought-after device imaginable.  Punisher got what he wanted — to be feared by his enemies – and Spider-Man got to make a ton of sarcastic quips.  Still though, it was an incredibly enjoyable crossover and we get even more Daredevil next week in the 12th issue of his book with new artist Chris Samnee at the helm.  Look forward to both the book and my review in seven days! 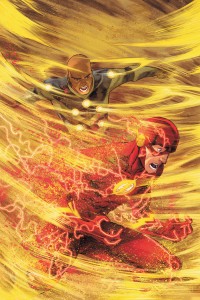 The Flash now finds himself thoroughly and hopelessly trapped inside the Speed Force with a mental case named Turbine only making his situation worse.  Turbine (Roscoe Hynes) was the pilot of a unique fighter plane in World War II that could apparently tap into the Speed Force, and he’s been trapped there ever since 1944 even though he doesn’t look a day older.  The Speed Force is explained as well as could be expected, and writers Francis Manapul and Brian Buccellato really lay the pseudo-science jargon on heavy in this issue with terms like “time stream” and “time anomalies” being thrown around with reckless abandon.  Apparently, time didn’t flow right until Flash came into the picture and started running super-fast, using up the excess energy from the Speed Force that would otherwise suck things from random times and places into it.   Thus, Turbine is convinced that Flash is actually the solution to this strange conundrum  and that Flash can help him escape and return to his rightful place in time and space.  Turbine also revealed that he has been the one creating the vortexes that pull things into the Speed Force.  The talking gorillas show up again for a few pages this time, and the last panel almost draws a connection between these two mysterious worlds.  It was another solid issue from one of the more mind-bending series of the New 52, with the gorgeous artwork still being the main attraction. 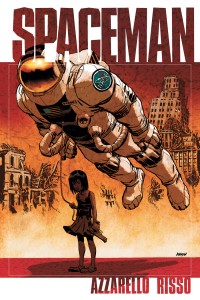 With every new perfectly paced issue of Spaceman, Azzarello reveals just enough to make the reader feel like they’ve encountered a huge revelation while still keeping enough hidden that the wait for the next issue becomes unbearable.  Every subsequent issue somehow tops the previous one, making for a series that truly keeps getting better and better.  This week’s issue starts off with a telling scene of Orson’s previous life on Mars that starts to reveal the turmoil the Spaceman went through up there.  One has already been killed for his disagreement with the other three, and the killer is still among them.  The storyline involving Mars is always something that I look forward to learning more about every issue and this week did not disappoint.  As if the main story about Tara and her pursuers wasn’t compelling enough, we’re also given this murder mystery that reveals more of Orson’s past.  Back on Earth, Orson’s whereabouts aren’t that much of a secret so he plans to return Tara to the “Dries”, the walled off section of the city where the floodwaters have been somehow kept out.  The Spaceman mercenary, now with the help of Lilly and her crew, seems to know about this plan and continues to seek her out.

Risso’s art blew me away this issue.  The two-page spread that contrasts the high-tech and rich world of the Dries with the slums and decrepitude of the Rise, which are separated by a gigantic concrete wall, actually gave me pause and I found myself saying “Wow” out loud.  Those kinds of moments are not rare in Spaceman, and with only three issues left, I cannot even imagine what Azzarello and Risso have in store. 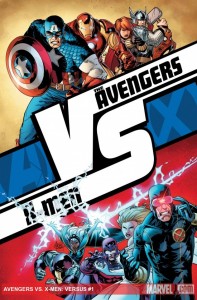 As I perused the racks this week, I found myself thrown off by this new Avengers vs. X-Men book.  Is it just the first issue of AvX with a variant cover?  Nope.  Could it be one of those books that explains the backstories of all the characters and catches readers up on the storylines of both parties?  No, not that either.  Once I opened the front cover, my questions were answered by a Q&A section (Marvel must have anticipated my confusion) that basically stated, “This book is about fighting.  No plot, character development, or real purpose.  Just a lot of hitting.”  Against my better judgment, I picked it up and during the five minutes it took to read through the whole thing, I hated myself.  In fact, I still hate myself, but at least I’m no longer reading that book.

The book can be seen as a really bad side-dish to a pretty decent meal.  It acts as a supplement to the main course and focuses on the individual scuffles that there simply wasn’t enough room to cover in Avengers vs. X-Men.  The first battle is between Iron Man and Magneto, written by Jason Aaron and drawn by Adam Kubert.  Right on the first page, third panel, the dialogue makes no sense…literally, no grammatical sense.  Magneto thinks to himself, “Surely he would not dare attack me, of all mutants, in a simple suit of iron?  If he has, this will be a very short battle indeed.”  I realize that the book shamelessly focuses on action and not dialogue, but that immediately drew me out of the panel and made it all too apparent that not much care was put into any aspect of this endeavor.  Brawling ensues for a few more pages; Iron Man siphons magnetic power from Jupiter and “defeats” Magneto.  Really though, they just kind of stop fighting and Iron Man flies away.  Very climactic.

This review is turning more into a bitch-fest than anything, but I feel the need to point out another giant and glaring mistake.  As Iron Man jets away from Magneto, he narrates, “…note to self: remember to come back a really big one.”  After the “come back” part, there is no period, and “a really big one” is in an entirely new word bubble.  Huh?  A really big what, exactly?  A really big disappointment?  He can bring this comic book!

There’s also a fight between The Thing and Namor, but the dialogue is even more unbearable and the action is not at all compelling.  The art in both sections is perfectly serviceable though, and I can’t help but think that the book would be more worth its $3.99 price tag if there was no dialogue at all.