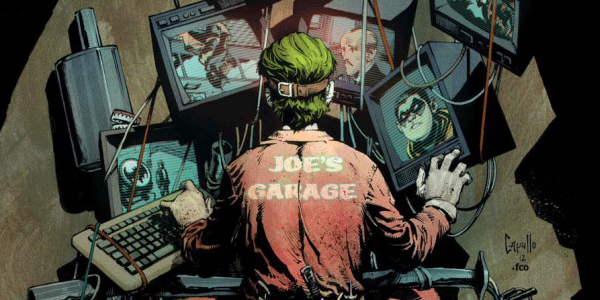 Over the years the Joker has been one Batman’s top villains, and in the newest collection he proves why he will always stay at number one.

The Joker has been missing for a while, his face kept in evidence at the GCPD. The usual bad guys running around, and the Bat-family doing their thing to keep Gotham safe, everything seems normal until he returns. The Joker does nothing on a small scale, and this time his plan is to take down the whole Batman world.

His plan starts with regaining his face, in the most gruesome way possible. He attacks the GCPD head on cutting the lights, stealing his face, and killing every cop in the squad room except Gordon.  It is one of the chilling moments in comics when the page comes a live leaving you feeling like you are right there with the characters. The Joker’s evil plan has started and it will not stop until he has taken down the Bat.

The Joker attacks Batman in the two ways, taking Alfred captive, and attacking each of his allies making everyone think the Joker knows the truth, Bruce Wayne is Batman. The Joker makes Bruce and his team question everything in their lives. They look for a trader, but find out that the Joker may have entered the Batcave early in Bruce’s life as Batman. Bruce even took proof right to the Joker, almost daring him to figure out who he was, and that could have been his undoing.

Scott Snyder crafts a wonderful story bringing back the rivalry between the Joker and Batman. The story leaves fans with just enough questions, leaving the door open for the Joker’s return and a deeper look at the relationship between these two men. The art is equally as good from Greg Capullo capturing the madness and disgusting new look of the Joker. If you only get one graphic novel from this great cross over this is the one to get, giving you the central story and main focus on the two big characters.