Batman finally takes the fight to the Court of Owls in this week’s issue.  Also, Batgirl beats a guy up and feels bad about it and we learn that the Silk Spectre grew up in a 1960s high school drama. 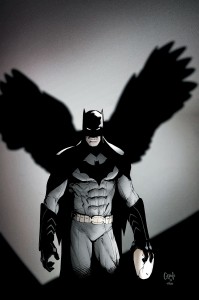 The end of the Court of Owls storyline is in sight, and even though it’s been mostly incredible I can’t say I’m saddened to see it go.  After all, there are only so many things that Scott Snyder can reveal about Bruce and his beloved city in one story arc.  This issue sees Batman out and about for the first time in a long time, making one final push to end the Court of Owls for good.  While he doesn’t exactly accomplish this, he does discover the missing piece of the mystery; I don’t want to spoil the revelation, but Capullo made the character Lincoln March resemble Bruce Wayne so closely for a reason (which he confessed on his twitter around the time the second issue came out).  Speaking of Capullo, his artwork in this issue, particularly the last few pages, is impeccable.  It will be strange to see another artist take over after getting so used to Capullo’s totally badass style.

This issue is also filled to the brim with excellent monologue and dialogue and actually feels like it’s worth $3.99.  This week’s supplemental story about Alfred’s father also fares better than last week’s, showing a side of Martha Wayne that we’ve never seen before and even tying into the main story.  Overall this is the best issue of Batman that has come along in some time, and it sets up what should be an epic conclusion to the Court of Owls. 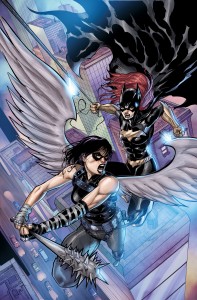 Aside from the fact that the artwork always looks like it was waxed, spit-shined, varnished and then waxed again, I still enjoy Gail Simone’s take on Batgirl. We still haven’t found out anything about the supposed miracle that put Barbara Gordon back on her feet, but the book provides plenty of passable action and a sympathetic main character.  This averageness continues with this week’s book, which introduces a somewhat interesting new young female character.  Her entrepreneur parents were murdered, and she aims to carry on their legacy of improving some of the slummier districts of Gotham.  Oh yeah, she’s also keeping some guy with his eyelids sewn shut chained up in a cage in her bedroom.

Elsewhere, Batgirl fights with members of this girl’s security detail, who dress up in pretty ridiculous costumes and call themselves The Disgraced.  I’m compelled enough to continue with this storyline only to find out more about that man trapped in a cage, and to see what this new Knightfall villain is all about.  Oh, and there’s a new artist on board for this issue, but it’s almost impossible to tell; I’ve never seen someone with the ability to completely emulate the style of the artist they’re replacing.  I’m not sure if it’s a skill or a curse, but it’s pretty impressive either way. 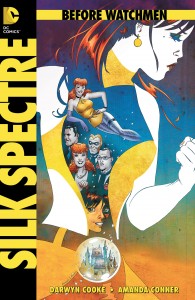 This book is a little bit tricky.  Is it about the original Silk Spectre of The Minutemen or her daughter, Silk Spectre II?  In this first book anyway, written by Darwyn Cooke and Amanda Conners and drawn by Amanda Conners, most of the focus is on the younger of the two.  The book plays out like a coming-of-age drama, complete with the jock boyfriend and the clique of hot girls who get jealous when they’re not getting the attention of said jock boyfriend.  It’s pretty familiar and at times overwrought, but the scenes depicting the mother-daughter relationship feel authentic enough.  Laurie clearly isn’t proud of what her mother used to be (a shameless floozy) and her reputation at school suffers because of it.  Her mother also forces her to train constantly and become skilled at fighting, probably in an effort to prevent what brought about her very existence.  Some of the scenes have music lyrics moving throughout them, and while that technique can sometimes add tension or drama, it was just blatant and kind of annoying here.  We get it – there’s a love song playing in the background while a mother and daughter punch each other in the face.  Juxtaposition of opposites, etc.  It just gets overused and its effect is lost pretty quickly.

Despite the lack of any real development or revelations, this is another solid comic.  It will be interesting to see what events eventually lead up to Laurie’s relationship with Dr. Manhattan in the next three issues of Silk Spectre’s book.