Before Watchmen is already upon us, and if the first issue is a sign of things to come for the next 35 weeks, we have a whole lot of awesome storytelling to look forward to. 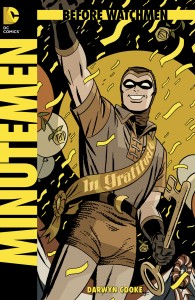 I’m happy to report that the first issue of Before Watchmen does not disappoint.  I was never opposed to the idea in the first place; where some fans of Watchmen saw a cash-in attempt and started saying ridiculous things like “DC is shitting on my childhood,” I saw an opportunity for a slew of talented writers and artists to expand upon the rich world of the original comics.  With this first issue, writer and artist Darwyn Cooke tells the story of the Minutemen, the first group of masked adventurers who were at their height in the 1940s.

Remember in Watchmen when Under the Hood, the tell-all book written by the original Nite Owl Hollis Mason, was mentioned?  Well, we now get to experience the first chapter of that book through the brilliant artistry of Cooke, who devotes about two pages to each original member of the Minutemen.  He does a fantastic job of identifying what makes each character so interesting and doesn’t waste a single panel in the process.  These are all characters that readers of the original Watchmen will be at least somewhat familiar with, so the fact that Cooke was able to take what was already known about them and add little bits of insight is commendable.

For example, the two pages dedicated to minor character Byron Lewis (Mothman) revealed that he started drinking because he was afraid of what he had become and he couldn’t trust his flying suit without the little bit of bravery (stupidity?) that alcohol can provide.  This is the kind of balance that I hope the writers of the other six miniseries can strike; taking these established and beloved characters and telling compelling, believable stories that fans of Watchmen can get behind.

Cooke previously served as storyboard artist for Batman: The Animated Series and his art style here is very similar to that of Bruce Timm, one of the main animators and character designers on that show.  His choice of framing evokes a cinematic style, even with the fairly basic illustrations.  Much like Paolo Rivera and Bruce Timm, Cooke’s art style benefits from being simple and clean, especially in a comic that’s portraying 1940s America.

My only gripe with this book is that it’s too short.  The stories told are great, but the limited space devoted to each character makes for a few shortcomings.  The narrator himself, when describing his origins as Nite Owl, relegates to saying, “I’ve already detailed how I trained and the effort that went into designing my costume” instead of even offering up a small reminder.  This was obviously due to space constraints, but it felt a little bit lazy.  Dollar Bill also gets short-handed with only one page of introduction that doesn’t reveal much of anything.  Luckily there are still five issues of Minutemen to go, and I can’t wait to see what other revelations Cooke has in store.