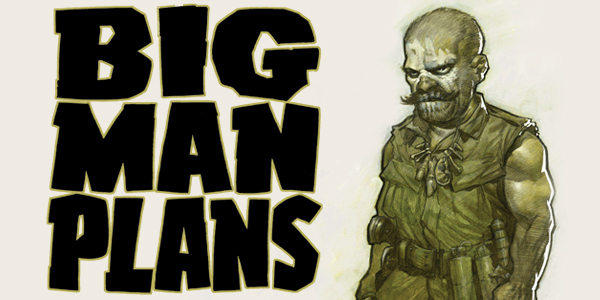 Big Man Plans is a filthy little book about about the biggest badass under four feet.

Image Comic’s released Big Man Plans by Eric Powell and Tim Wiesch back towards the beginning of March. The story follows a little person with a large amount of rage. This is the first issue of four, and spends most of it introducing us to the Big Man, and showing us what he’s capable of.

The Skinny
The Big Man is a little ball of hate and rage that is ready to lash out at the first dumb dumb that flaps their gums too wide. We first meet the man in a bar in Brooklyn, where he returns the free drink he got from a jerk patron with an explosive tip. From there, we get a history lesson on how crappy his life has been. His mom up and left because she couldn’t deal with the stigma of a dwarf son, which causes his father to drink his death. Big Man loses his sister in the adoption program, and ultimately finds his way to a special branch of the US Army, where he specializes in becoming the tiny bringer of death to the Viet Cong hiding in tunnels. After spending some time in prison for beating the hell out of a guy with a tire iron, he ends up making a name for himself by giving a neo-nazi an improvised tracheotomy with a broken fork. By the end of the first issue, he’s out and he’s ready to rage and get respect.

The Good
Everything about this little bad ass is great! I was so skeptical about this title, but after being persuaded by a buddy down at my local shop, I flew through the issue in one sitting. Despite the large amount of gore and mayhem, the story is told with a hint of humor which makes the whole thing really fun to read. Fans of Powell can find similarities to The Goon and should agree that this is another great story from this off-beat crime writer. The art is equally as compelling, having Powell’s style shine in every spread. Seeing Big Man as a dark silhouette with the skull make up would easily be one of the scariest things someone can see right before they die, and the entire scene when Big Man decided to eat out was too funny.

The Not-So Good
This is the first book of a four part series, so Powell and Wiesch waste little time with the telling of the backstory. We move from major life event to major life event so quickly that you can’t really dwell on any moment. Then, by the time the issue is done, Big Man is ready for vengeance, but I’m not sure if he’s just going against everyone, or the dude he beat up with the tire iron. The justice system? I guess what I’m trying to say is that Big Man seems to have so many enemies that it’s hard to say which one he’s going to focus on.

The Decision
I thoroughly enjoyed reading this filthy-mouthed, blood soaked comedy. Big Man is one tough dude, willing to take on any idiot, dumb enough to get in his way. I can’t help but think of Mark Twain’s saying about how it’s not the size of the dog in the fight, it’s the size of the fight in the dog that really counts. Well it’s clear Big Man has a lot of fight in him, and we’ll see who gets a taste of it when Big Man Plans #2 is released on April 8.