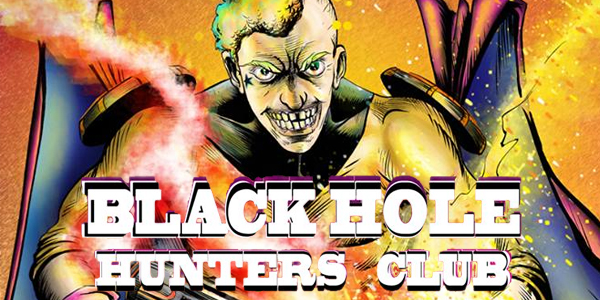 A pair of alien bounty hunters track down their mark, only to find exploding heads and friendship.

My weekend was spent walking the alleys of the Boston Comic Con, searching for the best independent creators looking to get their voices heard and their books seen. For those who have never been to a Con, it’s typical to see long lines at the tables of the greats like Neal Adams, Adam Kubert or Amanda Conner. It’s also typical to see tables that are not so crowded. Those tables are usually accompanied by a quiet, maybe slightly sad looking creator, just hoping someone will stop by and ask them what they have to offer. So, in an on-going effort to provide some exposure for lesser known creators, I’d like to feature some notable independent books each week, in hopes that the next time the con comes around, you can be in the know about some up and coming artists of interest.

I start off with a pair of creators that defy my description of the dejected artist. These two from Toronto attracted me with their personality, and quickly became the favorite people I met at this year’s convention. Writer, Ricky Lima and Artist, Shane Heron, teamed up to create a sci-fi, action, comedy that follows a pair of  bounty hunters through outer space, searching for a human target on a foreign planet. The story is called Black Hole Hunters Club and is already on its third pressing of the first book.

The protagonists of this tale are Hector and Lars, a pair of off-beat, alien brothers on a quest to serve justice across all of the universe. They are currently tasked with the mundane mission of tracking down Prince Human, a pompous, loudmouth, imbecile, that is terrible at hide-and-seek. Despite the threat of sandy rashes, the brothers make quick work of tracking down their target. The reader learns just what Lars, the slug-like alien, can do. Amidst a blinding light, Lars transforms into a monstrosity of a humanoid, in an attempt to catch Prince Human with a surprise attack. Well, it doesn’t take long to see through Lars’ ruse, despite his attempt at appeasing the Prince with a generous gift…of a joke. Thankfully the joke doesn’t work, and we get to see Lars and his brother Hector, the cthulhu-spider looking alien, unleash hell in a high energy spread of blaster fire and brain matter.

Just when you think the boys have their guy surrounded, the Prince’s head starts acting funny. Funny like in the exploding kind of way. Once the blood settles, the foul-mouthed voice of a cockney critter can be heard coming from the open neck cavity of Prince Human. Despite all accounts saying he was dead, out walks their pal Trevor. Trevor is best described as part insect, part octopus, and 100% alien bad ass. The three discuss the division of their payment as they depart the planet, leaving the readers to end on the sight of the Prince’s corpse laid out on a tiled floor.

Black Hole Hunters Club combines action and humor to create an engaging story about underdog heroes. I like how Lima has written the protagonists as uneducated and adventurous, allowing the readers to choose whether to sympathize or root for them given the circumstance. Heron inks his panels chock full of energy, with a lot of them bleeding off the page. This lets the action feel less contained, making the finished product wall to wall madness, especially in the fight scenes. The book is in black and white, so you can’t help but wonder what the scene would look like in full color, but given that this is an independent issue, it’s easy to overlook. I not only picked up the first issue, I bought all four that are currently available, and am very eager to dive into them as soon as possible.