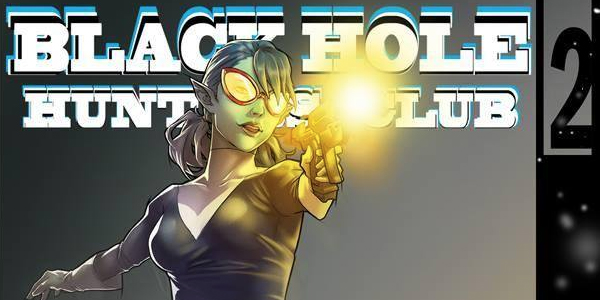 Can the Black Hole Hunters Club survive the unyielding force of the mighty cube?

I got a chance to dig back into all the indie goods I scored at Boston Comic Con this year. Tonight I read the second chapter in the Black Hole Hunters Club series by independent creators Ricky Lima and Shane Heron. Lima starts the tale by having Heron illustrate a large portrait of Lars, one of the protagonists, pleading with a new female character named Lilliam for help, and we leave them, for now, as she and her cute bug-dog speed off towards the distress call.

With a turn of the page we go back in time, giving clarity to Lars’ concern. We see Lars and his other two companions Trevor and Hector celebrating their recent kill. The trio are on their way to the Federation so they can collect their bounty for Prince Human. All they have to do is trade in a chunk of the human’s brain and they get their credits, but first they need to pass through the lawless space of the void, where anything can happen.

It doesn’t take long for Hector’s premonitions to materialize. Their ship gets voiped! and the console shuts down. Through the video screen you see a menacing monster chime in with how I will be referring to this comic the next time I see the creators in person. “Attention Butt Hole Hunters Club! Prepare to be boarded!” This crazy alien is called Ne’flav and he knows about the brain chunk. Right before they’re boarded Lars gets the directive to go call Lilliam, which nicely ties the loose end from the intro.

Ne’flav doesn’t mix words. He’s here for the brain and he’s willing to mess up anyone who stands in his way. He pulls out his magical cube of will and cracks the resisting Hector with a bolt of energy upside his head. Despite being knocked down, Hector continues to resist, which inspires Lars to act. Lars transforms into his tough guy version and tries to tackle Ne’flav, but he’s no match for the cube’s power. The cube makes reality out of the user’s will, and is seen to jam up right after Lars wished his father was here. Whatever the cause, the cube’s malfunction allows enough time for Lilliam to come smashing through a large glass window just in time.

Lilliam is able to overpower the opposition in a few short panels by throwing Ne’flav out the window she came crashing through. This for some reason pisses off Trevor, but we won’t get to know why yet. The book closes with Ne’Flav floating in space, cursing the BHHC and trying to figure out why his cube malfunctioned. Then a being appears…!

Black Hole Hunters Club continues to be a fun take on space adventures. I enjoy how Lima has written the characters. Despite them not resembling humanoids, the banter between them feels as natural as if I were talking with a couple of my friends. Heron adds to the appeal of this book by illustrating these alien creatures in heavy brushstrokes and exciting postures. I tend to gravitate towards stories where the characters feel like they’re perpetually in motion. Heron uses lines for shading which helps amplify the energy when dudes start flying. Needless to say, I’m on board to see what the Butt Hole Hunters Club do next.