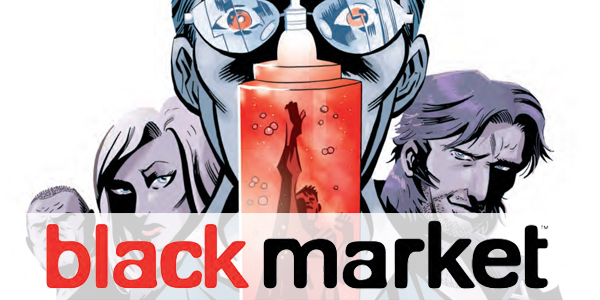 If the world could have chemically developed superpowers at the cost of your favorite superhero’s life, could you pull the trigger?

Black Market #1 opens on a night in October with a Human Torch type character called Hot Spot soaring to the scene of a blazing apartment fire. We see him rescue a man that is face down on the floor while a narrative can be seen about the perspective that capes and cowls bring, and how we’re all heroes. As Hot Spot delivers the man down to the awaiting fireman, the now conscious man tells him his son is still trapped inside. Hot Spot rushes back into the blaze, but quickly loses his composure due to foreign chemicals in the air. Luckily there is a firefighter right there to help him…or is he? With a turn of the page we learn that the narrator is the fireman, and Hot Spot’s ailment was no accident. Two sketchy looking guys named Albert and Denny are waiting behind the building with an ambulance ready for the blacked out Hot Spot’s arrival.

The story jumps back four months to June and where the narrator can be seen dressed in a different type of uniform. I really liked the way these two pages transitioned with each other. Santos illustrates Ray’s introductory panels with a combination of small close-ups, similar to Marv’s story in Sin City on top of a widening establishing shot. Together they harmonize a bizarre feel as the reader learns that as a mortician, Ray is very familiar with dead bodies. Through some other interactions, the reader can also deduce that Ray is a little mousey and kind of a pushover. However there is something aside from corpses that Ray has a passion for. Ray rushes home to find his female counterpart Shannon making dinner. Although Shannon implores him to calm down, Ray apologetically administers her MS injection as fast as he can. Before they can sit down to dinner, they are surprised by a knock at the door. A Fonzie looking guy in a leather biker jacket greets Ray as his little brother to which Ray responds with a right cross to his nose.

The story jumps back to October and catches up with the speeding ambulance being pulled over by a police cruiser. Ray’s brother Denny is the guy behind the wheel, and is informed by the officer that he is driving an unregistered vehicle. In back is Albert, Ray and the slowly awakening Hot Spot, remain undetected by the police at this point. Denny fails to amuse the officers with his wise-ass comments about finding the keys in a cereal box, and they open up the back doors to find the two men huddled around Hot Spot’s stretcher. With the cat out of the bag, Denny and Albert take off their kid gloves and knock out the two officers in a hurry. The trio speed off from the site of the incident as fast a possible, but there’s one problem. It appears Hot Spot is waking up.

Flashback time again to moments after Ray’s right hand, and we see Denny with an icepack to his face. Through the interaction between Ray, Denny and Shannon it becomes clear that Denny messed up badly in his past, enough so that he isn’t supposed to come around anymore. Denny pleads for five minutes with Ray, which Ray begrudgingly accepts. It appears Denny just wants to atone for his past grievances and offers a duffle bag full of cash as an olive branch.

With a FWOOM! it’s October again and the fully awakened Hot Spot is causing a ruckus in the back of the ambulance. After some struggle Ray is able to sedate the cape by injecting something into Hot Spot’s chest, but not before getting a nasty burn on his forearm. With the chemical in his system, Hot Spot appears powerless, and is susceptible to a clock cleaning punch from Albert. Once unconscious, Hot Spot poses no more threat as the ambulance makes its way to a nondescript laboratory on private property. After Ray preps Hot Spot for Denny and Albert, they congratulate him on a job well done. They talk about how much of a killing they’re going to make with the new medicine they’re developing. This doesn’t seem to phase Ray too much, and he excuses himself to go home to Shannon.

With a jump back to June, the real story of what the brothers are up to comes out. Denny is convinced that with superhero DNA, he can develop a serum to cure all disease. He tugs at Ray’s heartstrings by suggesting that the company he’s working for, Biochem, is able to take superhero blood and develop cures for cancer, aids and even MS. Denny assures Ray that they have a safe method of extracting the DNA, but they require Ray’s expertise in chemicals and the human body. With the last panel however, the reader gets a MUCH different story. Ray’s narration states that he kills superheroes, and the reader sees Denny and Albert standing maniacally behind the bound and bloodletting Hot Spot as the issue comes to an end.

Black Market #1 paints a pretty morbid picture of the creation of cures at the cost of life. Barbiere sets up quite an interesting question of morality, putting Ray between a rock and a hard place. I found this story to be both dark and heart warming, because it made me question how far I would go for the ones I love. Santos’ lines combined with Metcalfe’s color create a universe that keeps your attention the whole way through. The layouts are quite dynamic, exploring various size, shapes and angles, keeping every page looking fresh. The results are a twisted tale of two brothers trying to save the world one dead superhero at a time, and I am so on board to see who they kill next.