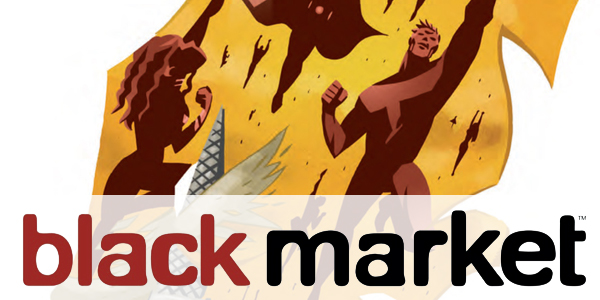 Back in August, BOOM! Studios released the second issue in their four part series called Black Market. The series is created and written by Frank J Barbiere with Victor Santos on art and Adam Metcalfe on colors. The story continues its look at the use of superhero blood on the black market. This series can be a little confusing at times, with the reader jumping back and forth without really knowing when present is. It comes off feeling like a confused retrospective, like someone is trying to remember every detail after the fact. We pick back up with the protagonist, Ray Willis, hard at work, wrist deep in cadaver.

Ray’s really good at working with dead people. He and another guy are conducting an autopsy on a guy that looks like he could use a plug. He has a hole that spans from nipple to nipple, and goes straight through him. Picture the guy in Kung-Pow: Enter the Fist with his chest plug falling out. Anyway, this poor sap did happen to be robbing a bank right before he died, and because of it, he had to face a super, who gave him the instant death punch. That’s the real issue with the supers. In a similar take as The Boys by Garth Ennis, the superheroes have a blatant disregard for human existence, thinking themselves superior. I wonder if Barbiere took this approach to help justify Ray’s actions, regardless of how barbaric they are at times. We also meet back up with Ray’s wife, Shannon, who is living with M.S. and dependent on Ray for health coverage, but their relationship is much more than that. Ray’s kind of the luckiest nerd around, good job with a hot wife. Things are going so well until his brother Denny crashes back into his life, delivering it back down to the depths of crime.

We jump ahead a year and catch up with Ray, pilfering materials from his current employer. He works in a funeral parlor now, for a hard ass named Mr. Del Torre, who is always yelling at him about something. As Ray is leaving, we’re reminded about what happened in the previous book by a news flash on the tv. Hotspot, the super they drained in the previous issue, is now reported missing. Ray dodges any of Del Torre’s questions on the matter, and dismisses himself to take a call from Denny. In a clever way to change subjects, we use the phone to hop into the passenger seat with Denny, and join him on his meeting with the buyer of the blood. A cold-looking woman sitting in the shadows of an unmarked truck is waiting to receive Denny’s blood samples. Her name is Janine, and she is trying to cure cancer with the super blood. However, she is unimpressed with Hotspot’s brand, pointing out that the sample is barely gamma level and is not much stronger than morphine. As a result of the less than ideal sample, Janine pays Denny a fraction of their original agreement, and dismisses him. After some contesting, we see that Janine is one of few people that Denny feels intimidated by. He shuts up, takes his loot and leaves.

We slide back four months to the boys exploring the warehouse Biochem set up for them. We see the boys talking about needing someone to help them secure “donors” so they head to the bar and meet up with Albert, better known as Bruiser. Bruiser is an OG hero. No powers, just a lifetime of boxing, a heart full of courage and a head full of rocks. In an attempt to prove how worthy Bruiser could be, he has set up a meeting at the same bar with an old super friend of his, that he’d like the boys to meet. However, it looks like Leonard, the Electric Lad isn’t interested in meeting anyone. He zaps the whole place and makes for the door. He leads them on a chase that goes a few city blocks, and engages them in various fight sequences along the way that are pretty exciting. I really liked the panels where Metcalfe simplified his color palette and illustrated the decimation in gray tones, allowing the electric blue lines to zap at full power. Electric Lad continues to run, until he makes a grave mistake. He slips into an apartment building, and is yelling at full volume about how they are not worth his time, and how he’s going to fry them all. A group of angry neighbors from the apartment building have filed into the hallway, and they aren’t too keen on being fried. One woman smashes Electric Lad on the back of his head with a vase, temporarily staying the attack, but turning his attention towards them. In a last ditch effort, Ray gets to a fire alarm panel and pulls it just as Electric Lad lets out a jolt. The raining water short circuits him, laying him out on the ground. What started as a kidnapping, now has Ray getting kisses from strangers and being called a hero. However, on the next panel, back in October, Ray gets home to find Shannon isn’t alone. Ray’s two “buddies” from the precinct dropped in for a surprise visit, and are enjoying a cup of joe. It looks like Ray might be in deep.

I really like where this story is heading. Ray is the kind of guy you can’t help but root for. Yea he steals, and does petty crime here and there, but it’s good natured crime. Maybe it’s that I have a soft spot for a chivalrous hero trying to do right by his lady. Also, making Ray a victim to the negative effects of a destructive brother, helps Barbiere get his readers hook, line and sinker. Santos and Metcalfe are working in a beautiful harmony as well, creating really exciting panels that keep you connected to the story the whole way through. My only point of contention with this book is the time hopping. With long breaks between story progression, I lose the significance of the dates, and am forced to go back to reassemble the timeline in my head. Not necessarily a bad thing, being that it’s unique and more challenging than your stereotypical comic, but I find more success with understanding a story like this when it’s read all at once, like in a trade format. Once this series finishes it’s four issue arc, I’ll probably take some time to reread the entire series, just to see what I missed. I currently have the third issue sitting next to me, and will be diving into it fairly soon.