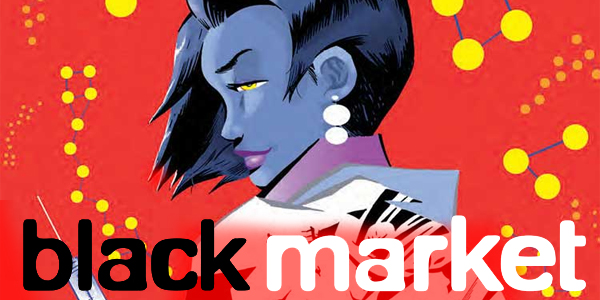 Three down and one to go as this suspenseful story about syphoning superhero blood continues.

BOOM! Studios released Black Market #3 back in September, the third of a four part installment that just wrapped this past week. It is created and written by Frank J Barbiere with Victor Santos on art and Adam Metcalfe on colors. The series follows Ray Willis as he watches his life spiral out of control before his eyes. Ray’s brother Denny relies on him for help with all things medical. Whether it’s patching up a buddy who caught a stray slug or syphoning the blood from a superhero so some company can make medicine from it, it’s safe to say that his brother gets him wrapped up in some dirty doings. All of this might have caught up with Ray because at the end of the last issue, he was surprised to find two local police officers waiting for him in his kitchen.

The officers, on top of complimenting Ray on his wife and her coffee making abilities, aren’t there to arrest him. On the contrary, they’re there to extort him. The cops don’t care for the supers, but won’t turn a blind eye for less than forty percent. They leave Ray with 48 hours and a couple threats, which shakes him up pretty good. After making up some cruddy excuse and kissing his wife goodbye, he heads straight for Denny and Bruiser to figure out their next step. Bruiser gets the idea to call in a favor to his old buddy Tiger Bomb, have him help scare the cops a bit. Once he’s face to face with his old friend, Bruiser bends the truth a bit to properly entice and enrage Tiger Bomb. Bruiser suggests that the two cops were the ones that killed his friend Bobbi. The crushing of the cup is enough to tell us Tiger Bomb is in for some action.

We jump to the docks after dark to find Denny and Ray on a stakeout. They’re waiting for the two cops to show up for their take of the cash. The spread was a bit confusing, because the art suggests the boys are in a car, but on the next page they’re in a boarded up building with no connection as to how they changed spots. Regardless, their plan works almost perfectly. Tiger Bomb, who looks like a jacked up hybrid of Wolverine and Mad Dog, tears the two cops a new one. The reason I say almost is because right before it goes down, Denny and Ray are joined by a Superman looking guy, dressed mostly in white. The hero is arrogant and looks down his nose at the filthy criminals before him, holding his head high with egotism and a heightened sense of self worth. We see Ray get taken through the court system while he narrates his story. Shannon stays with him, but who knows how long they can keep her MS in check without any funds. Ray loses his right to be a medical examiner and everything went to hell.

On the next page, Tiger Bomb is still at it, and Ray is watching from a car. I don’t know if I missed a time jump, or if we saw a quick flashback, but in any event we get to watch Tiger Bomb dismantle the two officers in two spreads of high action, crazy angle, blood soaked panels. Before he can kill the second officer, the boys try and make a run for it, but the lights from the truck catch Tiger Bomb’s attention. He stomps out the brain of the second cop then heads for the brothers. With ease, he pulls both Ray and Denny from the cab, and prepares to dish out some more street justice. However, right before Tiger Bomb strikes Ray, a bullet catches him in the head, dropping him. Out walks Janine with a friend holding a sniper rifle, to belittle the Willis boys some more. Denny was bugged, and Biochem heard their whole hairbrained scheme. After she’s done berating them a bit more, the issue ends with Ray and Denny receiving their next target, it looks like they’ll be chasing after the all white Superman named Ultra who beat the snot out of them in that weird jump sequence.

Black Market #3 continues it’s interesting look at the dark side of superhero science. This issue has some really intense action that was pretty enjoyable to read. The storyline however is a bit convoluted. It jumps from a recent past to what is assumed to be the present kind of quickly, without a lot of visual cues as to where you are. It doesn’t take away too much from the story, but definitely causes me to backtrack to make sure I have the facts straight. Santos and Metcalfe are working very well together on bringing these two brother’s troubles to life. The panels are set up in a way that keeps the visual interest up, filling in the cracks that the story might leave. The final issue of this series came out this month, and I’ll be getting my hands on it soon to find out how their story ends.