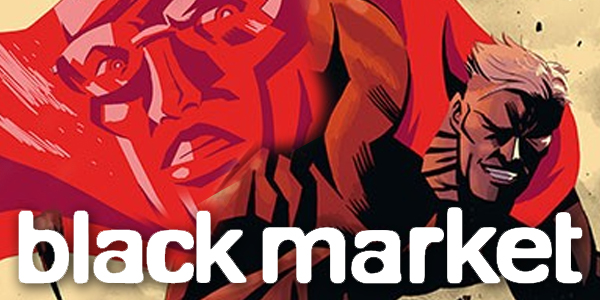 Black Market #4 concludes by showing us even the meekest of men can take down a God, if they put their mind to it.

BOOM! Studios released Black Market #4, the conclusion to this four-part series, back in October. It was created and written by Frank J Barbiere with Victor Santos on art and Adam Metcalfe on colors. The series follows Ray Willis, killer of superheros and savior of the world. However when we last left he, his brother, and their knuckle dragging pal Bruiser, the three were gearing up to fight Ultra, the Super-Man of their world.

We pick back up with a look at Bruiser and the brothers pulling on gloves and masks. Seems there plan is to hold up a bank, which will hopefully be enough to attract Ultra the super-douche who punches holes through people. We get a reminder as to why all this is going down, with a look back at the night Ray saw the super cells splitting. Basically, what this shows is the cells’ ability to heal themselves. On the next page we jump to a bank heist in progress, but it took place back in 2012, a year prior to the current story time. We can see Denny working his magic on a safe when a ka-boom distracts him. Presumably, the distraction was the last time he met Ultra face to face.

Then it jumps to Ray driving the van with a costumed Bruiser and Denny riding in the back. The boys talk strategy, but when push comes to shove there’s only one tool they need. They’re special weapon, which is supposedly strong enough to pierce Ultra’s skin. The three roll up, then roll out a smoke grenade, instilling panic into the bank patrons. They went in loud and large, ready to make a ruckus. On the facing page, we hop back to February and see Ray sweet talking a clerk at a local police precinct with some of his wife’s chocolate chip cookies. He was there for research on supes, and he found the work invigorating. Turns out he enjoyed living above the law, and liked the kind of person it was making him. We cut back to the bank job, where the boys are a little worried their super friend won’t show. Denny get’s more flashbacks to the last bank job he pulled, where he wasn’t ready, but now he was. If only he weren’t day dreaming…

Bruiser snaps him out of it just in time, as the ceiling crashes in, allowing Ultra, the super-douche, to float in. Ultra sees himself as far superior to the human race, so he takes little regard to human life when he begins doling out justice. Before the blood starts flying, we’re given the scene of the first time Ray and Janine from Biochem met. Apparently we’ve been mislead this whole time, and Ray was the one who initiated the meeting, and the Biochem backing. Ray set all the terms and told Janine his team needed his brother. Better yet, he told Janine to contact his brother in prison, and make it look like Denny was the one to set it all up, in an attempt at giving him a win, and hopefully saving his wasted life. But let’s get back to the fisticuffs.

Ultra, the super-douche, wastes little time before grabbing Bruiser by the shirt and wrenching him in close. Ultra comments on how pathetic they are, then proceeded to punch a hole straight through Bruiser’s sternum. With a bloody SPLORCH! Bruiser is down, and it looks like Denny’s next. Denny unloads a bunch of bullets from his gun, but they bounce right off Ultra’s skin. I really liked how Ultra had Bruiser’s blood dripping off his arm. It made it that much more menacing. With little effort he snaps Denny’s arm, but gets distracted before he can finish the job. Ultra turns and bears down on his next target, which looks like he’s the security guard in a ski mask. He’s talking to someone, but Ultra can’t figure it out until it’s too late. Ray shoots Ultra from behind with his super gun, and takes down the super douche. We’re given a gruesome couple panels as we see the liquid in the dart slowly seep into Ultra causing him to foam at the mouth, bleed in his eyes, and eventually die. We also see that the security guard really works for Biochem, and they’ve been watching the whole time.

Ray goes to collect Denny, and tell him what really happened. Denny is shocked to learn that his mousey little brother set everything up, and almost refuses to understand. The two are led to the back of a van, where they’re met by Janine. Turns out there was some other bits to their deal that needed sorting, and with a quick pull of her trigger finger, Denny ceases to be. She sends Ray away, saying he’s not cracked up for this life, and we get the smallest little smile from him as he walks away. This lead me to believe he was hoping his brother would die, but what really happens is way better.

Which takes us to today, where Ray is talking in front of three businessmen as if the whole story has been a recanting to these three gentleman. Ray spells out how Denny and Ultra’s death ended up being a catalyst for his takedown of Biochem and of Janine. The murder was pinned on them, and the resulting aftermath ended up bringing heroes and humans closer together. But Ray’s not done. He managed to get a vial of pure Ultra and he’s currently in the works of setting himself up with future funding. Because he is Ray Willis, killer of super heroes and saver of worlds.

All in all I enjoyed the Black Market series, even though it was a bit hard to follow at times. The story jumped back and forth in time a bit, but didn’t always cue the reader as to where we were, or maybe I just missed it. I also didn’t like how Ray’s wife wasn’t mentioned at all in the last issue. Was she made up too? I was under the impression Ray was looking for a cure to Shannon’s MS, but as the fourth issue ends, we see a conniving Ray ready to sell to the highest bidder. I really enjoyed the art throughout this series. Santos and Metcalfe combined to illustrate in a style that is unique although sometimes rigid. The action was good, and the different typefaces made the typography and sound effects add to the page instead of just sit on top of it. So ultimately, it was a pretty interesting story about what could be done with super blood, I just think some of the complexity of the story was rushed to fit into four issues.