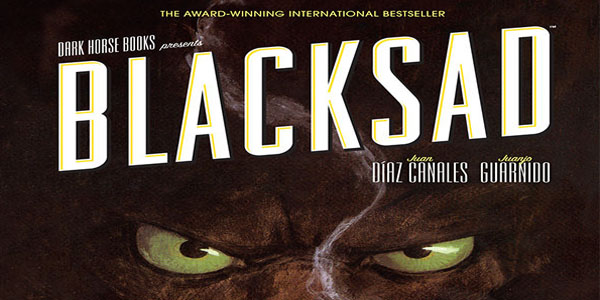 Of all the thousands of comic book series to discover, a story about an anthropomorphic cat that solves mysteries probably wouldn’t grab the attention of many readers.  But Blacksad, a European comic series about just that, defies all logic and delivers strong storytelling and incredible artwork that any fan of graphic novels would be sorry to miss.

Traveling to another country exposes one to all sorts of new and exciting things.  On my recent trip to Paris, I discovered a culture that was at once totally familiar and completely foreign.  But I didn’t go for the Eiffel Tower, the Arc de Triomphe or the delicious, delicious croissants.  I went to experience their huge comic scene and to find out firsthand what we Americans have been missing.  I was steered towards Blacksad by the extremely helpful manager of an art bookstore (yes, Paris has entire shops dedicated to selling books filled with comic book art).  As soon as I set eyes on the first page, I knew I had to grab a translated copy upon my return and I was ecstatic to find that Dark Horse published one in 2010.

Blacksad is the joint creative effort of Spanish writer Juan Diaz Canales and artist Juanjo Guarnido.  The biographies in the back of the book describe how the two met at a Spanish animation studio and immediately became friends with a common interest in creating an original comic series.  The first “episode” of Blacksad was published in France in 2000 and three more have been released since then, though only three have been translated to English and collected by Dark Horse. 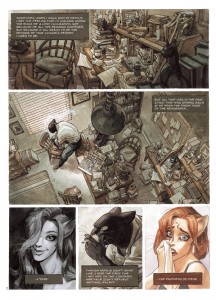 The title refers to John Blacksad, the main protagonist of the series.  He’s a hard-boiled detective in 1950s America; Philip Marlowe with whiskers.  In fact, every character is an animal that acts like a human (or a human that resembles an animal…take your pick).  While this might sound a lot like some kind of bizarre fan-fiction project by those people who call themselves “furries” and dress up like their pets, it isn’t.  The species of each character represents some quality that they possess, so it’s possible to identify with a character before he or she even utters a word.  There’s a rat that’s hired to follow around his employer’s wife and make sure she isn’t cheating; the police chief is a German Shepard; and almost all of Blacksad’s love interests are felines.  This technique is used so well that you almost forget the characters even are animals and you start to identify with them just as easily as any human.

The Dark Horse book that this review refers to collects three of the four episodes currently released in Europe, though the fourth is being released in the U.S. this summer by Dark Horse.  The first story, Somewhere within the Shadows, is pretty rudimentary compared to the others.  One of Blacksad’s former lovers, a beautiful actress, is found lying murdered in her bed and Blacksad must hunt down the killer.  It’s a story that wouldn’t be at all out of place in a Raymond Chandler novel; drama, monologues, action and plot twists abound.  The next story, Arctic Nation, steps up the narrative and goes well beyond the typical detective fiction scenario.  Blacksad has to investigate the disappearance of a little girl that’s been attributed to a gang of black animals.  Taking place in the ‘50s when racism was still a very real issue, the story weaves that subject in with several other compelling plotlines and resolves with an incredibly touching finale.  Finally, Red Soul is a complex tale of political intrigue that deals with the period leading up to the Red Scare and perfectly captures the mindset of the world during that time.  It’s dense enough that, were it Diaz Canales’s intention, it could have been a full novel.  Luckily for us, he made it into a graphic novel with Guarnido. 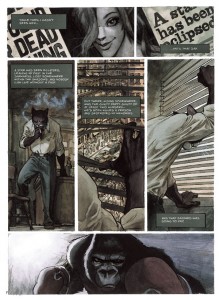 The artwork in this series simply cannot be described in words.  I’ve never seen an artist as capable as Guarnido at conveying emotion through character’s faces.  As painter and illustrator Jim Steranko brilliantly deducts in the book’s introduction, “He gets more out of his animal faces than most artists do from people faces.”  Guarnido worked for many years as an animator for Disney, contributing to films like Tarzan and The Hunchback of Notre Dame.  In Blacksad though, his style resembles that of classic American film noir (and it certainly isn’t appropriate for little kids).  Flipping through the pages of the book, one could mistake it for the storyboards of a fantastic crime film yet to be released.  Every single panel packs an unbelievable amount of detail and subtlety that often isn’t seen in American comics.

Any fan of detective fiction or film noir would love Blacksad.  The artwork alone makes the book worth owning, but the sophisticated storytelling makes it a must-read.