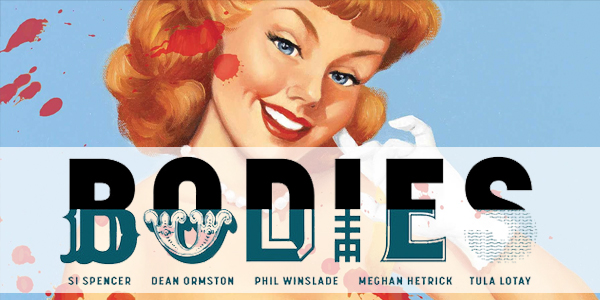 Most summer events I can take or leave. For example, I’m a Marvel guy at heart, so I was excited to buy a couple of the first Original Sin books. Unfortunately, I’ve lost interest and somewhere in the third issue. It still may be too early to tell, but judging by the initial offering, Vertigo’s summer event might have some staying power. The series is called Bodies and offers a fairly unique style of storytelling, released in eight parts. Before I get to the credits, you should understand how the story works first. The premise behind Bodies is that four different detectives find murder victims bearing a similar resemblance in London. One catch, the murders take place years apart from each other. The crimes take place in 1890, 1940, 2014, and 2050, and we get to peer into each time frame and watch the sleuths of their respective times work. So, to effectively achieve this dynamic in print, writer Si Spencer teamed up with artists Meghan Hetrick, Dean Ormston, Tula Lotay and Phil Winslade to tell his tale of four time periods with four different visual voices.

Bodies begins like every good book should, with a riot. You can see a narrator talking, but it takes a few panels to narrow in on which riot officer is doing the narrating. Eventually we’re shown a bad ass looking cop in full riot gear taking down a perp. Chronologically, we are in present day London, and it’s Hetrick’s pen telling the story at this point. A couple more pages in, and you see that the bad ass cop that’s narrating is better described as a bad ass Muslim woman named Detective Superintendent Hasan. She’s met by her partner Barber and taken towards their crime scene on Longharvest Lane. During their interaction, you get a feel for D.S. Hasan’s personality, and realize that she is sharp and bitingly funny. Once they suit up and lay eyes on the corpse, we’re shown a naked man laying on his side in an alley, with a huge gash taken out of his midsection. It’s decided that this isn’t some random killing, but the act of a professional.

With a turn of the page, we are whisked back to 1890 and enter Ormston’s section of the story. We first lay eyes on a shadowy figure standing against a wall on Longharvest Lane in London. He appears to be receiving fellatio from a very generous female friend. The pair are caught in the act by Inspector Edmund Hillinghead, and attempt to flee. During the chase, one of the perpetrators stumbles on something in the alley. What is that something, might you ask? It’s another victim! They find a male corpse, laying naked on his side, with a huge chunk ripped from his midsection. Well a murder scene is more pressing than a small prostitution charge, so the Inspector lets them go. I enjoyed the humor in these panels, and how the color range is gray-tones with red highlights, reminiscent of Sin City. Given that this is the era of Jack the Ripper, one of the other Inspectors suggests him as the first suspect, but the victim doesn’t fit Jack’s typical M.O. of females. So it’s off to the morgue for Inspector Hillinghead to try and find the pieces to solve this puzzle. He meets some resistance from the ornery Coroner, who ends up leaving the Inspector with the body, and not much additional information. Inspector Hillinghead busys himself by taking headshots of the deceased, and we leave this time period with a very creepy interaction between the Coroner and the other Inspector in front of a sinister looking emblem. You can’t help but notice the correlation between the murders and the two men toasting to the “Long Harvest”.

We hop back into our invisible Tardis and fly all the way to 2050 London and meet up with the very bizarre Detective Maplewood. By this point, Lotay has taken control of the images, and her unique style of illustration lends itself nicely to the strange environment that this future brings. Armed with a bow and arrow, Maplewood happens upon a corpse that looks the same as the previous two. The book tells you that she finds the corpse on “ONGARVANE” but any clever reader can easily deduce that this is the Longharvest Lane of the future. However, Maplewood may be the worst detective ever. Between sitting on the body to think, or dragging it back to her warehouse while singing her hit new song “Drag, Drag, and Drag”, you can’t help but think that she may not be right in the head. This part of the book is filled with erratic and inane babbling that starkly contrasts the highbrow dialect of the 1890’s. There are some other clues laid out within these panels, and could easily be missed if Maplewood’s mumbling is too distracting. After we witness Maplewood take far too long to deduce that this isn’t a suicide, we’re left with a very confusing interaction involving a rubber ball and a girl in a nightgown, standing in a pool of blood.

On the next page, Winslade takes the reigns, and we find ourselves in 1940 London with more cryptic talk of long harvests and a reminder that there’s a war on. We meet Inspector Whiteman, a quintessential noir style detective. We’ve caught him in the middle of an interrogation, and after lighting his stogie with an acetylene torch, he begins to turn it on his suspect. A warning from an air raid alarm makes the Inspector drop what he’s doing and run for cover. To those unfamiliar with this time period, these are the times of the London Blitz, a string of air attacks by the Nazi forces. Good thing the Inspector got out when he did, because by his fourth page, the warehouse erupts in a huge explosion. After the Inspector and the officer he was with recover from the blast, the two men’s attention gets pulled down towards the road. Laying before them is a nude male body, laying on its side, with a huge cut out of his midsection. I bet you’ll never guess what road they found him on.

Bodies #1 is a fantastically interesting mystery story involving great characters throughout time. I really enjoyed seeing the different art styles come together to tell their piece of the puzzle. Spencer’s adventure is cryptic and engaging. I’ve read back through a couple times now, and have found new things hidden in the panels that could possibly be related. Even the logo Steve Cook designed for the cover has some elements to it that are suspect. Basically, what I’m trying to say is that if you enjoy a well-told murder mystery that will keep you perplexed, then Bodies #1 is for you.