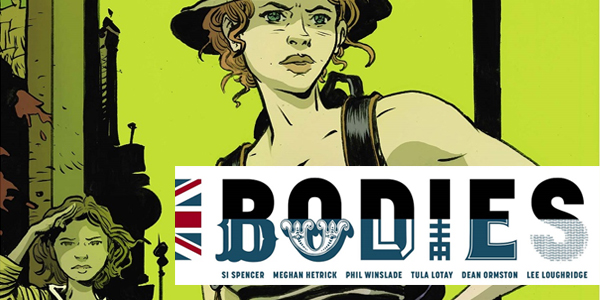 The newest issue of Bodies from Vertigo has four murder mysteries throughout time that are slowly beginning to intertwine.

Newly released on the Vertigo imprint is Bodies #3, the continuation in the murder mystery that spans 160 years. The series is created and written by Si Spencer, with art by Dean Ormstrom, Phil Winslade, Tula Lotay, and Meghan Hetrick each drawing one of the four detectives in a different time period. Somehow these four murders are connected, but like any good mystery, there seems to be way more questions than answers.

Bodies #3 opens in present time as we ride shotgun with Detective Superintendent Hasan and her father on their way to mosque. We learn that Hasan doesn’t feel comfortable around the Imam, so she’s having her father ask him about the symbol that is engraved into her victim’s wrist. However, before he can get to the front door, a huge explosion erupts from a car parked near the building. Amidst the mayhem, Hasan notices that a banner with the same markings can be seen near the explosion site. After confirming that her father was still alive, she concludes that this was no accident. This was a message, and it’s time for her reply. I really enjoyed how pissed off and intimidating Hasan looks at the bottom of the second page, with tears running down her face but her teeth clenched tight. She and her partner Barber start tracking down low level, or as she puts it “cannon fodder” men, and are able to locate one named Robert Taylor. When the police barge in on his shed, he is in the middle of some hand to gland combat. Obviously, Taylor is surprised by the police intrusion, but can’t really do much about it. Amongst his personal effects, the cops find a treasure chest filled with Nazi memorabilia. When Taylor objects to the search, claiming he’s a patriot, it hits Hasan’s last nerve. She loses it on this guy, and beats the snot out of him while claiming how much more of a patriot she will ever be than him. Taylor’s cries for help fall on deaf ears as the other detectives look away and let Hasan finish. We leave this time period with an enraged Hasan walking away from a beaten Taylor.

Through the ad break, we jump back seventy years and pick up with Inspector Whiteman watching some other police brutality go down. A group of constables are stomping the heck out of a nazi soldier who is currently in their custody. In an attempt to play the good cop, Whiteman offers the guy a cigarette, but the nazi soldier is more curious about Whiteman’s accent than anything. Whiteman says it’s Polish, but it seems like Whiteman isn’t telling the whole truth. The next part of the story is kind of confusing to me. The German asks how Whiteman escaped the ghettos, to which Whiteman responds by telling a story about his eighteen year old niece. However, the six panel flashback shows a girl much younger looking than eighteen, walking hand in hand with an older man. They are both wearing the Star of David, which were mandatory accessories for all Jews in Poland in 1939. We see a man dragging a girl along, rather forcefully, with the girl showing some signs of defiance. Next we see the man trade the girl to a Nazi soldier for what looks to be a passport and a miniature zeppelin. The Nazi then tries to know the young girl in the carnal sense, but his session is cut short by a quick knife swipe across his throat. Then in the last scene, we see the man draw a Luger on the girl, and shoot her through the head. Not sure if this is included to make us not trust Whiteman at face value, or if I’m misinterpreting what is being presented. The two men continue talking for a bit until Whiteman is pulled away by another officer. Before he leaves, the Nazi pulls Whiteman in close and whispers weisst du geliebt werden, which is know that you are loved in German. This phrase has been included at several different points in this series, and is becoming the “Bad Wolf” of this series. Also interesting is the fact that Whiteman understands German. Anyone can learn a language, but it could be possible Whiteman isn’t originally from Poland. From here, Whiteman heads to the morgue to join the enraged Mahoney standing over a corpse. Mahoney can tell that the body in the morgue isn’t his nephew, and wants answers about where he is from Whiteman. However, he doesn’t get much before storming off in a fit of rage. So, in an attempt to put an end to the confusion, Whiteman heads back out to Long Harvest Lane to sift through the rubble of the building that was bombed in the first issue. There amongst the debris is the Irish kid, leaving Whiteman confused as to who is laying on the table in the morgue.

Next we jump to the future and rejoin the odd Detective Maplewood on her hunt for a pipette. Maplewood’s time is illustrated by Tula Lotay, and incorporates a lot of neon colors to compliment the weirdness that this time brings. She opens a cabinet with the letters KYAA, another perpetual clue in this series, and out rolls a bunch of balls, similar to the one her friend Bounce is carrying. One in particular, reacts when it hits the ground, and emits a light with the same symbol Hasan is chasing. Just as soon as it lights up, it goes out, leaving Maplewood to assume she broke it. She figures Bounce must know about these, and goes back to the main room to find her. Instead of finding Bounce, she is ambushed by her. Bounce injects a syringe filled with green liquid into Maplewood’s neck, then reminds her that she too is loved. What follows is hard to explain. We see a minotaur looking creature hacking up a male body, similar to the corpse that is found in all four eras. We then see the minotaur engrave the symbol into the wrist of his victim. Lastly, we see a mumbling Maplewood laying on her side, babbling about spaghetti hoops, then Bounce says something about a ghost in the machine, then Maplewood sings dig dig dig, and they end by saying this is brutality in unison. Clearly all references to either previous conversations or some that have yet to take place, but what really strikes me as strange is the blood running from the lips of Bounce. It’s a very weird series of panels, and guess what, we get no real explanation as to what it means.

Lastly we shoot all the way back to 1890 and find Inspector Hillinghead waking up, after being struck on the back of the head in the previous issue. Standing right in front of him is the same symbol that both Hasan and Maplewood saw. Deciding this is far from coincidence, Hillinghead takes it upon himself to break in and further his investigation. With his lock picking equipment, he makes short work of the door and lets himself in. Once inside, he’s met with a rather portly gentleman who is currently enjoying a hookah and a glass of wine. When asked about the symbol, the man is matter of fact. It is simply two facing H’s, symbolizing his name Henry Harker. Hillinghead is clearly feeling the effects of his head trauma and subsequent blood loss, but he manages to work through the pain to continue the investigation. Hillinghead figures this guy to be a common fraud, assuming his abilities are simple parlor tricks. Hillinghead draws the curtain on a painting despite protest from Harker, and finds a horrifyingly familiar site. On the painting is the victim in all four time periods. He has cuts on his side, a mark on his arm and the words “so begins the long harvest” written in latin. Hillinghead confronts Harker about his family heirloom, but doesn’t get very far with his questions. We end this issue with Hillinghead being interrupted by two floating figures that resemble Maplewood and Bounce. The issue closes before we learn why or how they got there.

Bodies #3 is another wonderful continuation to this very strange murder mystery. Having each artist illustrate a specific time creates quite a journey for the reader to undertake. Each story feels different, but they all still feel like they’re working towards the same goal. This issue also marks the first time the detectives are crossing paths, and could very well be the start of an awesome transgenerational team up. In any event, I am hooked on this series, and will be counting down the days until October 22 when the next issue is released.