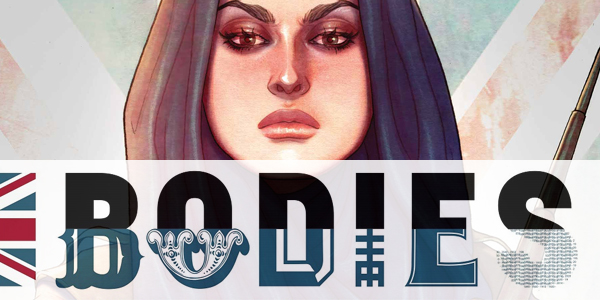 The detectives face a complicated mystery that becomes even more challenging when their murder victims start disappearing.

Last week Vertigo released Bodies #4, the next issue to this esoteric story of a murder that spans a century. This twisted tale is created and authored by Si Spencer, and he is working with four different artists, each tasked with specific time period. Phil Winslade has 1940, Dean Ormstrom has 1890, Tula Lotay has 2050, and Meghan Hetrick is drawing the present day character on the=is month’s cover. The mighty Muslim Detective Superintendent Hasan. A quick aside, it was great to hear about Hetrick’s take on drawing Hassan at NYCC. Despite the cover art, this issue picks up with Inspector Whiteman taking out his frustrations on Mahoney with his knuckles.

Mahoney, the burly sap who had been giving Inspector Whiteman guff is currently tied up and bloodied. With it being the time of WWII it would appear times are tough for the London Detective, who is currently verbally accosting a line of people come to pay him tribute. Amongst a pile of jewlery he spots a golden brooch with the facing H’s bearing the portrait of a man. The sight of it unleashes a viceral reaction from the Inspector, who seems to fear the necklace more than anything. He waves a revolver around for a second, to further intimidate his crew, but ultimately it’s poor Mahoney who feels the Inspector’s wrath. Whiteman empties his revolver into his face. Message sent. Once alone, he bags his take and makes for the door. It’s obvious he’s shaken by the presence of his new accessory, but we learn his full concern on his last panel. Inspector Whiteman is greeted outside by a group of Mahoney sympathisers, and they brought a shotgun.

We then fall back to 1890 and the time of Inspector Hillinghead, who is standing outside the shop of Henry Harker, trying to make sense of the Maplewood and Bounce ghosts he saw at the end of the last episode. Clearly Hillinghead is better composed than the poor Mr. Harker, who is laid out on a stretcher. He is foaming at the mouth and cross eyed while yelling about a Bogman, a brooch (Whiteman’s?) and a maiden in a veil. Just as they’re putting him into the horse drawn ambulance he proclaims that the longharvest is coming! Hillinghead says it well, what is the Long Harvest? Also, it would appear that Hillinghead’s investigation just became more difficult, being that the murder victim is gone due to lack of space. His superior tries to console him by saying no one cared, but it doesn’t appease the Inspector. It would appear his superioir is in on the crime, and isn’t very interested in having Hillinhead continue the case, so the Inspector is forced to drown his sorrows at a local pub. He’s not as alone as he thinks he is, because while he sips his suds, two men eye him eerily. They wait for the perfect moment, like when the Inspector heads to the alley for a whiz, then strike. With mouth hugs. I agree it’s not the most aggressive action, but it being 1890, the resulting social outfall would surely be worse. So it’s probably a bad thing that two cops catch them in the act. A note on the art, I love that everyone has a sweet ass mustache in Ormstrom’s 1890.

Next we speed into the future to find the odd Detective Maplewood waking up in the year 2050. She feels like an ocelot threw up in her ears, mostly because Bounce injected a syringe into her neck in the last issue. Still feeling playful, Bounce taunts Maplewood and insists that she chase her into the other room. On the other side of the door sits a large collection of the balls we keep seeing in Maplewood’s time period, but now they’re all open and displaying video. Mostly snippets of news articles fill the page as you slowly work down towards the portrait of a gorgeous beast. The woman in the picture is named Margaret Belwood, and she is currently a fugitive with seven counts of terrorisim on her record. She bares a pretty striking resemblance to Maplewood making the connection between the two as obvious as being smacked in the face with it. Anyway, Bounce contiues to provoke Maplewood and heads for the door. Outside is a beautiful wasteland of urban decay. It’s hard to pull all the good bits of information from the nonsensical fluff that Maplewood thinks, but it’s still enjoyable to watch her and Bounce sit outside under a couple tress. But something’s on the horizon, and Bounce knows it’s coming. In the last panel we can see a large group kinky and crazy looking people which Bounce describes as both a cavalclade of amnesiacs as well as the Long Harvest. They crowd of creeps respond by shouting know you are loved.

We wrap up with Detective Superintendent Hasan who is studying her notes while walking aside her partner (in both a personal and professional sense). We can see a picture of Whiteman’s brooch that Hasan describes as ancient Roman as well as the facing H’s. The pair sneak in a smooch before finding London’s newest homicide victim. Laying face up is the corpse of Andrew Morley, one of the police’s insiders, with keep off the grass stapled to his chest. After some police work on scene, the medics get the body to the morgue, leaving Hassan and Barber to finish their stroll. Barber however wants something more, but he’s picked the wrong woman to try it with. Hassan is forced to crack him in the jaw as well as forcefully knee Barber’s pelvic region just to make sure her disinterest is clear. It appears the beaten Barber understands, but makes himself sound even more ignorant by blaming it on her religion. Hasan shakes it off, and decides to get her mind off of what happened by taking another look at their victim’s body. One problem, when she gets to the morgue, all she finds is an empty drawer and another facing H symbol.

Bodies #4 is one more strange offering, that at this point, is to be expected from this team of creators. Each illustrator works hard at making their eras feel immersive, and the what results is captivating cells filled with intruige. I also keep finding new symbols and references on second or third readthroughs of the issues. KYAL and the facing H’s appear numerous places, so it will be very interesting to finally learn what Spencer has been teasing this whole time. Halfway through the series, and they should know that we’d love some answers. We’ll see how generous they are when Bodies #5 drops on November 25th.