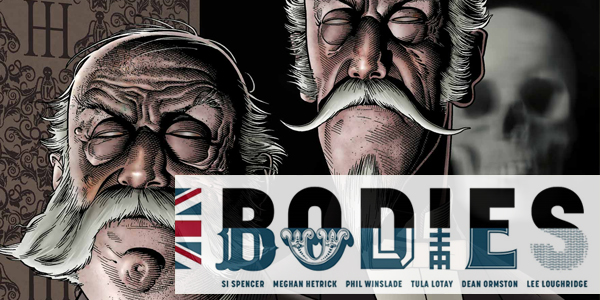 The British detectives are back for another shot at solving the murder that spans time, and they’re getting some much needed help from the one-eyed man.

Bodies #5 was released by Vertigo at the end of November. This time travelling murder story is created and written by Si Spencer, and he is working with four different artists, each tasked with a specific time period. Phil Winslade is drawing Inspector Whiteman in 1940, Tula Lotay is drawing Detective Maplewood in 2050, Meghan Hetrick has present day with Detective Superintendent Hasan and Dean Ormstrom has 1890 and Inspector Hillinghead. Bodies #5 begins like the previous issue, and finds Inspector Whiteman facing a five man mob with a shotgun.

The guys with the gun are none too pleased with Whiteman, following the beating and subsequent death of the tough, Irish guy, Mahoney, that had been giving Whitman grief the whole series. He doesn’t fear his attackers at all. Whiteman just stands there, ready for action and trading insults with the gunman. Whiteman reaches for something in his coat, under the ruse of fetching a cigarette, but before the gang realizes what it is, it’s too late. Whiteman sends a sharp trill through the air, care of his pocket whistle, and on the following page, all hell breaks loose. In a really exciting full page spread, we see Whiteman dismantle his attackers one by one. By the time backup arrives, all the attackers are lifeless on the ground, and Whiteman is enjoying a cigarette in the night air. We jump to the following day, where Whiteman is now sitting across from the nazi soldier in the back of a van, because the Nazi is being transferred to a different holding cell. The soldier alludes to Whiteman having a dark, swastika filled past, but the two are disrupted when the van comes to an abrupt stop…on top of an unexploded nazi bomb.

Next, we find Detective Superintendent Hasan reviewing video footage of the morgue. As the panels progress time a mere seven seconds, we see one of the drawers open and close by itself, revealing the facing H’s symbol that has been teasing Hasan. Puzzled and clueless, she decides to head to the British Museum for some help from a symbologist. We meet the familiarly named Henry Harker, brandishing cufflinks with the same facing H’s symbol. The two walk over to a very familiar piece of art to this story while talking about the fertility background of the family symbol. We see the painting showing a victim that is strikingly similar to Hasan’s victim. She asks what the latin in the corner means, and we hear that phrase that has been following us, “and so begins the Longharvest”. While talking to Professor Harker, Hasan doesn’t hear her partner, Barber, come up behind her. She’s upset to see him, probably due to his actions in the last issue, but the two don’t get to talk long. Hasan’s phone goes off, and on the other side is a bombshell. A stranger just confessed to the murder.

We then jump back to 1890, and find Inspector Hillinghead awaiting rescue. In the last issue, he was caught receiving felatio from the herring-breathed gummy maw of a sturdy longshoreman. His fellow Inspector bails him out, and the two head down to the lodge to get cleaned up. We learn what’s really going on pretty quickly. For some reason this guy doesn’t want Hillinghead pursuing the Longharvest case any more. Apparently they were the ones to set up the Inspector. However, Hillinghead refuses to give in to the threats, and when he gives them no other options, they’re forced to deal with him in the only way they know how. Hillinghead is lied to, saying he’s passed the test and ascended to the next level. He’s given a cocktail and knelt down, but just as he’s about to be struck dead by two men with long bludgeoning sticks, one of the hooded executioners attacks the other instead, murdering the man with one hard strike. Confused, Hillinghead stands up and faces his savior. The man lets down his hood, and his face excites Hillinghead. We leave the Inspector locking lips with the one-eyed man, knowing he is loved.

Lastly we vault to the future, and catch up with the oddball Maplewood as we try to make sense of this very strange future. The King of the Cavalcade, which is to say the nuttiest turd in the bowl, requests an audience with the champion, which apparently means Maplewood. She leaves her buddy Bounce on the rooftop and jumps down to meet the parade of weirdos that has gathered. The man wants to touch Maplewood, which she has to clear through Bounce, but apparently all that is cool. Then the parade of idiots continues to mill about around her, all talking nonsense. Or at least we’re to perceive it as nonsense, but I can’t help but suspect there’s some clues as to what’s really going on hidden in their rambings. Once Maplewood starts remembering what remembering tastes like, Bounce calls her back in. After the rickety elevator ride back up to the rooftop, Maplewood walks inside for a snack. Surprisingly, she finds the corpse she’s been studying sitting upright, and alive. He too is missing an eye.

Bodies #5 continues to puzzle the hell out of me, which is causing me to crave it that much more. Amidst the nonsense and the red herrings, there is some deep rooted symbology and planning at the root of this story, and it’s really interesting to see the light being shed on them a little more each issue. Searching for clues across four artists work is also proving to be a fun challenge. Each artist is so talented, and brings their era to life in a visually unique way. My limited attention span is delighted by the short bursts of story progression. Also finding the clues has caused me to go back and revisit past issues, just to see what I missed. Bodies #6 is out Christmas Eve, which makes the perfect gift for any murder mystery lovers you might know.