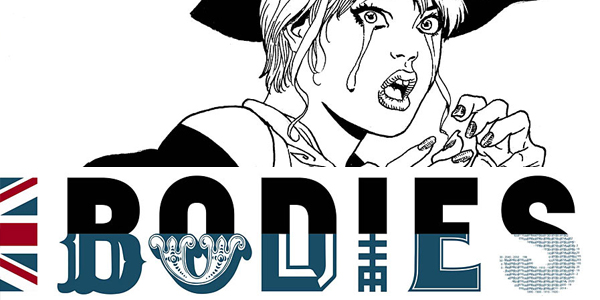 Bodies is back to poke at your brain and ask, can the victim really be the perpetrator?

Si Spencer and his band of merry illustrators are back with Issue 6 of the Bodies series, released by Vertigo. Together, with the four artists; Phil Winslade, Tula Lotay, Meghan Hetrick, and Dean Ormstrom, the creative team is collaborating on a murder mystery that spans a century. Last issue saw a confession to the crime, but the culprit looks a lot like the victim.

The Skinny
Bodies 6’s connecting theme is the interview, which can be seen carried through all four stories. Hasan, in the present, gets her culprit alone in a room, only to find out he’s wearing a detonation pack strapped around his chest. Hillinghead gets a more personal conversation with his culprit, granted it’s more pillow talk than anything. This all leads up to the fantastic panel of the crash and fall. Whitehead’s interview is with the Nazi he’s been trying to pin murder charges on at first, but he too meets a man that resembles his victim, to which Whitehead keeps both eyes out for him. Lastly, Maplewood the weirdo, hangs out with the one-eyed naked man, drinks some of his blood, then remembers a little about what life was like before the waves.

The Good
All four artists are working on overdrive with the finale on the horizon. Both Ormstrom and Winslade took chances with full panel illustrations, which both paid off rewardingly. With both happening as the cliffhanger, we the readers are captivated by back to back imagery that begs for more information. I also really like Ormstrom’s panel showing all four detectives in a demonic, bloody type fashion. Very striking and strange. The writing continues to elude me. With other series, you can guess the twist after the first issue, but there is so much left still at play in this story, that I can’t be certain as to what’s going on.

The Not-So Good
Thinking about it, I’m having a very hard time understanding Maplewood’s storyline, and what she’s experiencing. Given the style and the subject matter, it would appear that she was written as the most cryptic character. The strange language and bizarre visuals make it very difficult to remember bits about her tale particularly. I imagine it will be the sort of thing that after the big reveal, a second read through will shed way more light and insight as to what’s really going on around her, but until them I’m left scratching my head at times.

The Decision
I thoroughly enjoy reading Bodies. It’s very intriguing to see how the four timelines intertwine and form a knot of knowledge. We’re two issues away from the end, so I’m expecting some big reveals in the next book. Maybe he’s really an alien, or maybe he’s a god type character sent to mess with humans? I can’t help but speculate as I wait for Bodies #7 to come out January 28.