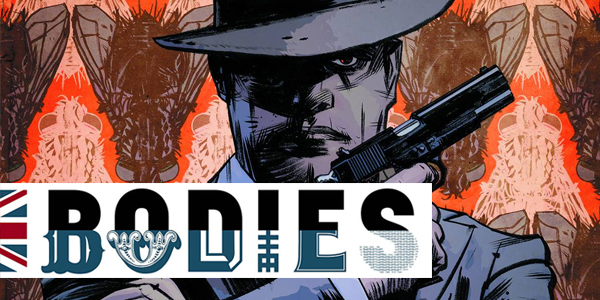 Getting closer to the end of Vertigo’s Bodies, but they’re still keeping their answers bottled up.

Vertigo released the second to last issue of their series Bodies, about four murders happening at four different points in time that are all related. The creative team for Bodies #7 includes writer Si Spencer working with artists Phil Winslade, Tula Lotay, Meghan Hetrick, and Dean Ormstrom. We’ve reached the trial part of our journey, with all four detectives coming face to face with daunting challenges.

The Skinny
Hillinghead comes crashing into a fantasy but it’s ended abruptly by an interruption in a jar. Maplewood continues to piece together what she can remember, but that too comes crashing to an end. Hasan’s partner, Barber, takes out his sexual frustrations by setting her up with a van full of explosives, leaving her two ways out. Both are bloody awful. Lastly, things stay weird for Whiteman, and when he tries to escape to a pint, he’s met with some familiar faces.

The Good
Something I have under appreciated during this series is how closely each of the 4 stories are tied to the main theme of the book. This issue felt closer than some of the others, with each detective facing a challenge unique to them. I’ve enjoyed how each issue feels like it’s four mini books in one, almost like an anthology in a way. The artists continue to create wonderfully creepy panels that embody this mystery well. Take for example Ormstrom’s jar or Winslade’s headtrip, both are excellent and eye catching. With this series drawing to a close, I’ll be sad to see it go, but I’m hoping the finale is as interesting as the entire series has been.

The Not So Good
What the hell happened to Hasan? Why was she wearing an abaya while doing detective work? I went back and reread Bodies #6 to see if I missed something, but I couldn’t find anything. We left her hurt and confused, after a suicide bomber exploded himself. Now, somehow she got set up by Barber. It feels like we’re missing some context or connection. By the end of the scene, it’s obvious why it’s there and shows us how strong of a character Hasan can be, it just felt like we missed a step getting there.

The Decision
With the end in sight, hopefully we’re on the verge of understanding what the hell is really going on. We got an alien looking thing in a tube, and apparently Whiteman and Maplewood both have broken time. We’ll just have to wait and see what budges when Bodies comes to a close February 25th.