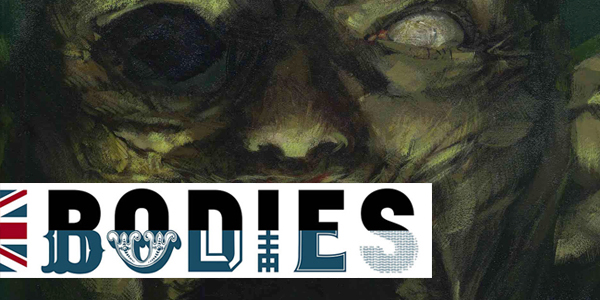 Judgement is upon us in the world of Bodies, and each of the four detectives finally finds clarity.

Vertigo released the conclusion to their series Bodies back at the end of February. The story followed four murders happening at different parts in time that are all related. The creative team for Bodies #8 include writer Si Spencer working with artists Phil Winslade, Tula Lotay, Meghan Hetrick, and Dean Ormstrom. The time of judgement is here, and for most of our heroes, it comes as a relief.

The Skinny
The four stories all come to a close as this strange era walking mystery draws to an end. Starting with Hillinghead, we learn how the victim and the perpetrator connect, but ultimately, it’s what it unlocks in Edmund that means the most. Next we see Maplewood smash then save the world. With a quick drink we’re transported to the time of Whiteman, whose troubles are too much for Jack’s assistance. For him there is nothing. Finally we find Hassan bleeding out a pattern we’re all too familiar with, in hopes her savior will come. Sounds like Bull to me.

The Good
The whole series was really fun to follow as these four distinct detectives worked simultaneously at uncovering the truth. Reading a story through the hands of four artists every month wasn’t challenging at all, like I had once thought it would be. Spencer has enough things carry over and tie through the tales that following the string of consciousness is easy once you have all the parts. Reading the work of the four artists is what enticed me about this series at the onset. Each has a unique storytelling style, making each era feel unique. I also liked how we get to see detectives cross over, like how we got to meet a much older Hassan in this issue. What made the four artists working together interesting is that it didn’t feel forced. The story Spencer wrote needed to be told this way for it to work. I reached out to him on Twitter to see if he’d ever consider a project like this again. He replied with “If the project merited it, sure. The nice thing about Bodies is it isn’t a gimmick. It was kind of the only logical approach”.

The Not-So Good
I only file this here because it’s worth noting. Once I finished Bodies #8, I was very confused as to how the whole thing shook out. So, I promptly went back and reread the whole series front to back from the first issue. With this came a much better understanding of the story, and I was able to pick up on things that were overlooked on the first time through. The conclusion was perplexing, with some very large ideas for me to wrap my head around, so any added clarity was immediately sought after. I’m still not certain I understand the full message behind the story, but one of the larger concepts I have taken away is the knowledge that I am loved.

The Decision
Bodies #8 is a pretty fantastic conclusion to a very strange murder mystery series, but that’s what you should expect in a series where the victim is the perpetrator and people drink blood to time travel. Watching this story unfold through the pen strokes of four artists has been a joy to read and played well to my inability to devote large amounts of attention to anything. Ultimately what I got from this series is the names of five more creators to keep an eye out for. Bodies is a perplexing murder mystery that challenges the reader’s perspective on the world through a four part story spanning a century. It is a must read for anyone looking for something different out of the mystery genre.