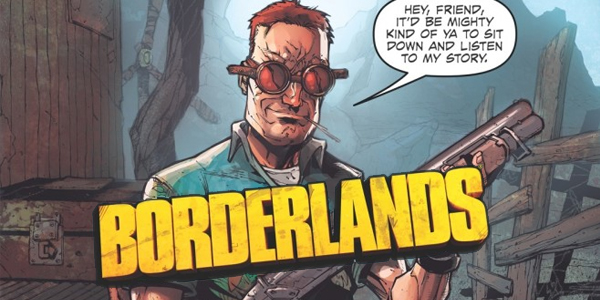 I went back to Pandora for IDW’s latest release of Borderlands: The Fall of Fyrestone #2. The series is written by Mikey Neumann with art by Agustin Padilla and colors by Esther Sanz. Picking up where the first issue let off, we find ourselves in the midst of four deranged vault hunters, Roland, Lilith, Mordecai and Brick, on a peculiar planet filled with bandits and hulking alien beasts. The four are in need of some transportation, and it seems the man they need to talk to is called T.K. Baha.

Borderlands: FoF #2 opens with a flash back. We see a silhouetted T.K. out mining the fields followed by a female silhouette of his wife, Marian approach him. T.K. and Marian talk for a bit about supper, and it’s about that time that T.K. realizes it’s two-soup night. It feels like Padilla put this interaction in to show that T.K. once was a rational, more sane person. This helps contrast the eccentric man we meet a couple pages from here.

The story jumps back to present day, and we see the vault hunters moving closer to a sleeping T.K. sitting on the front porch of his house with a shotgun. After some discussion from the group as to if he’s dead or not, it’s decided that Lilith and Roland will be the ones to check. Even though Roland is the one wearing bullet proof armor, Lilith insists she doesn’t need armor and should be the one to wake him up. The startled T.K. fires the gun in his waking panic, which Lilith dodges with a quick phase shift (this is where she gets all purpley and ghost like). However, Roland was standing behind Lilith, so when the shell passes through her, they end up finding Roland’s sternum, knocking him to the ground. Roland is able to regain his composure and Lilith strips T.K. of his rifle while Mordecai and Brick stay back and laugh at the whole scenario. Once everyone has settled down, the vault hunters get back to business and ask T.K. for a vehicle. T.K. is willing to scratch their back if they scratch his, and his itch is a wife, knife, leg and eyes stealing alien dog called Scar the skag. After T.K. regales the vault hunters with his sad tale, and Roland tells a sad story about this time he rode on a rhino and murdered someone mid-pee, the group agrees to track down the beast and make it bleed.

It doesn’t take long after the vault hunters make it to Skag Valley for them to find their target. Showing their ingenuity, the four divide up tasks so that they can efficiently take down the terror. Brick the brute is elected to go first, and despite a bit of a struggle, he’s able to puncherize the monster right in his dirty skag mouth. While this is going down, Roland is attempting to rain bullets down on the skag, but his gun proves to be less than accurate. Despite missing, his shots are still able to rile the monster up enough for it to want to charge his next target, which happens to be Lilith. However, she is set up on a cliff, with Mordecai hanging just over the ledge, out of sight. Scar charges at Lilith, but she’s able to phase shift right through the beast, causing it to plunge head first off the cliff. During the fall, Mordecai takes his shot and buries his sword deep into the back of the skag’s head. The two come crashing to the canyon floor, leaving both Mordecai and Scar feeling the hurt. This pause in action allows Lilith the jump down and deliver the killing blow. Victorious, the team return the sword to T.K. and celebrate with, you guessed it, TWO-SOUP DAY!!!

Borderlands: The Fall of Fyrestone #2 is as fun to read as the video game it to play. Neumann makes sure to capture a lot of the off-beat comedy that the game has and compounds it with an action pack adventure that makes for quite the one-two combo. These lunatics are beautifully illustrated by Padilla and Sanz, with their expressions capturing the full extent of their madness. The fight scenes were especially exciting, and I enjoyed the use silhouette distance panels to counter the perspective of the close up shots. The plot seems to be following the first video game fairly closely, which isn’t necessarily a bad thing to me. Despite knowing what eventually will happen, it’s enjoyable watching these characters interact with the bizarre world they find themselves in. Also, a lot of the dialogue in the story is not found in the game. If memory serves me right, Borderlands: The Fall of Fyrestone #3 should introduce my favorite person in the series, a red-necked goofball mechanic by the name of Scooter. I will definitely be picking up the next issue where the team is sure to catch-a-ride!!!!!