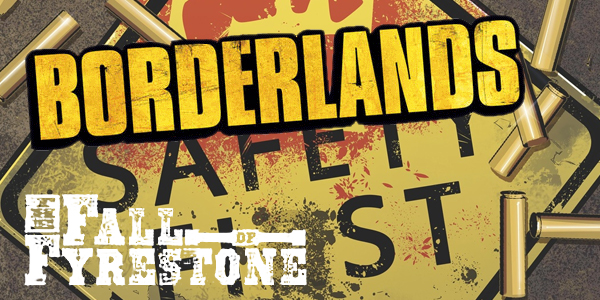 IDW released Borderlands: The Fall of Fyrestone #3, the next installment about the alien planet of Pandora and the vault hunters that inhabit it.

It had been too long since I hung out with my friends on Pandora, so I saddled up and read the next installment of IDW’s Borderlands: The Fall of Fyrestone. The series is written by Mikey Neumann with art by Agustin Padilla and colors by Esther Sanz. The art and storytelling continue to be fun and entertaining, however some of the character’s personalities have altered slightly in printed form.

At the start of Borderlands: The Fall of Fyrestone #3, we find the vault hunters in need of a ride. They’re gearing up to go toe to toe with a crazy psycho named Nine Toes, so they went to where the cars live to get themselves one. They find Scooter, the lovable mechanic, currently under some kind of sedan trying to rescue a sandwich from soldered fate. The first few panels featuring Scooter sound ok, but the farther I read the more I felt like the personality didn’t match the character I became familiar with while playing the video games. I think it’s that the word choice seems off. Too many syllables for the charming, knuckle dragging grease monkey that complained about people messing up his mom’s girl parts. I guess I’ll get both complaints right out in the open. Where’s the runners? I was looking forward to Padilla’s take on the open top super trucks you can drive around in the game, but instead we get some jacked up monster truck. Sure it does look a little cool, but again it’s just not what I’ve grown accustomed too with the Borderlands brand. Anyway, back to the story. Eventually Scooter agrees to help, but needs a few hours to work on the ride first.

Next we get a super sad story from CL4P-TP, better known as Claptrap. In a flashback, he and an attractive girl named Tate would spend the days dancing out in the desert. When they weren’t dancing, they were greeting newcomers to Pandora. However, one day when attempting to greet newcomers, Tate was exploded by an ambush attack by Nine Toes. Claptrap’s robot body saved his life, but Tate was left in a coma, left to boogie in her dreams. Claptrap appeals to Lilith’s softer side by asking her to dance with him, to which she begrudgingly accepts. Then the two shake their moneymakers for a while.

Then it’s off to Roland and the munitions man Marcus to learn about the plan, if you can call it that. Brick and Mordecai roll up in their monster truck, then Lilith shows up somehow. The plan is simple, let Brick make the plan. Idea being that he is so chaotic that the enemy couldn’t possibly have prepared for his type of attack. They pile in the monster truck and head off in Nine Toes direction. Three klicks out, they’re met with a monster truck looking Camaro that wants to play chicken. Brick says gun it and the two cars start flying towards each other. Instead of showing off the truck’s turret (if it has one) or some other type of interaction you could do in the game, we instead see Brick fly towards the windshield of the enemy car. He crashes with both feet then somehow gets thrown to safety. Apparently the bad guys are dead, although we get no real evidence visually, and the hunters scoop up Brick and continue pressing on.

Eventually they make it to Nine Toes lair and can be seen carrying the big man Brick down a long cave tunnel. Once inside, they finally come face to face with Nine Toes himself. He’s standing between two monstrous looking skags ready to fight for survival. Before any shots are fired, Nine Toes begins an explanation through rhetorical questions. To ensure his audience’s full attention, he arms the minefield that surrounds the vault hunters. Nine Toes expresses his concerns about what’s in the fault, more specifically, the fact that he doesn’t know. It could be something so bad that it wipes out the planet, destroying all life, even his. The vault hunters are unswayed, and are forced to face Nine Toes head on. They’re still surrounded by mines, but fortunately their plan guy, Brick, just woke up. He laughs and says they’re gunna die.

Borderlands: The Fall of Fyrestone #3 is weaker than it’s previous two releases. For a series that advertises 87 bazillion guns, I was very surprised to not see one shot fired in the entire issue. I can appreciate taking another approach on characters as unique as the ones on Pandora, but when their personalities have been long withstanding, it’s hard to shake the inconsistencies. I’m sure not everyone reading this comic is as familiar with the games as I am. I’m sure not everyone hears the voice of the characters speaking the lines like I do. But for those of us that are aligned with the brand and tied to the universe, it’s off putting to find the differences. What hasn’t faded is my appreciation for the art, which is still detailed and exciting. We can see a lot of motion and emotion in every panel making the scenes riveting and fast paced. We’ll see if the art can still keep bringing me back when Borderlands: The Fall of Fyrestone #4 comes out November 12.