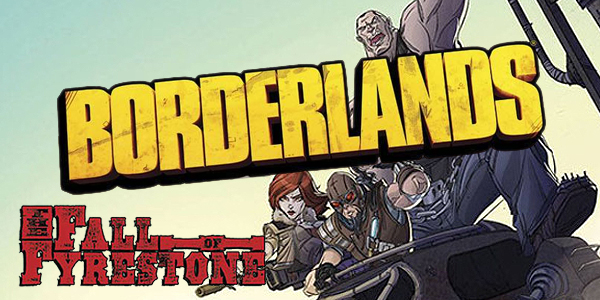 Borderlands: The Fall of Firestone is a new series that follows four treasure hunters on an alien planet filled with an assortment of monsters and mayhem.

When I’m not reading comics or working on something of my own, I turn to video games for inspiration and relaxation. My game of choice for the past couple of months has been Borderlands 2. So, imagine my excitement when I found out that IDW is releasing another new series in the Borderlands universe titled The Fall of Fyrestone. The series is again written by Mikey Neumann with art by Agustin Padilla. IDW released the Origins series, with the backgrounds on each of the four main characters, and how they found their way to Pandora (an alien planet filled with an assortment of monsters and mayhem) in early 2013, The Fall of Fyrestone follows what happens after the crew step off of Marcus’ bus.

The series starts just likes the game do, with an introduction by my favorite character, CL4P-TP (Better known as Claptrap), a wild, little, unicycle robot that guides you on your adventure. What I like about Claptrap is that he provides a lot of the comic relief, and the first few panels illustrate this very well. After a good FWAMM! we finally get to meet the team of Vault Hunters. The characters are from Borderlands as well as Borderlands: Origins, and include Roland the stern soldier, Mordecai the drunken sniper, Brick the neanderthal bruiser, and, Lilith the magical siren. Within a few minutes after stepping off the bus, the group is attacked by a bandit menace. As Marcus the bus driver puts it, “Pandorans aren’t the most accommodating to strangers. Sometimes they say hello by murdering your face and wearing it to parties”. Good thing Marcus has some loaner weapons, which he gives one to each of them and lets them have at it.

Team Vault Hunters easily takes care of these low level bandits, especially when Lilith breaks out her siren abilities and phase-shifts (a teleportation of sorts) the bandits from their vehicle. Padilla captures the look of the phase-shift from the games, using a purply-blue galaxy pattern to show her altered state. The results are a few quick-moving, high-action panels of people getting their butts kicked. Neumann decides to give each player some solo time, probably to better introduce the individuals to anyone not previously invested in the story. After the bodies are buried, begrudgingly by Claptrap, the four meet back up with Marcus and make for Fyrestone.

As in the first game, a meanie by the name of Nine Toes has ransacked Fyrestone and driven away all the people. We learn this from Marcus as he tries to convince the Vault Hunters to help him get his town back. Marcus uses the fact that he’s not only a bus driver, but he also owns the largest munitions business on the planet, to further help persuade the team into helping. After the promise of a hell of a lot of guns and Claptrap failing miserably to make a new friend, the group agrees to pay Nine Toes a visit. The story closes with a very ominous full page shot of Mister Nine Toes, sporting the signature Borderlands style gas mask and a safety first codpiece. He knows about the Vault Hunters, and he’s ready for them.

Borderlands: The Fall of Fyrestone is a fun alternative to the Borderlands video game. It captures a lot of the look and feel of the game, and has the same dark humor underlying every page. Padilla illustrates the cast pretty close to how they appear in the games, but makes sure to add his own style to each one. Being a fan of the games, the story is interesting to me because it follows the plot of the first game, and offers a for instance of what happened. Neumann has the game’s plot line as a quality road map to use as the story of the Fall of Fyrestone continues.