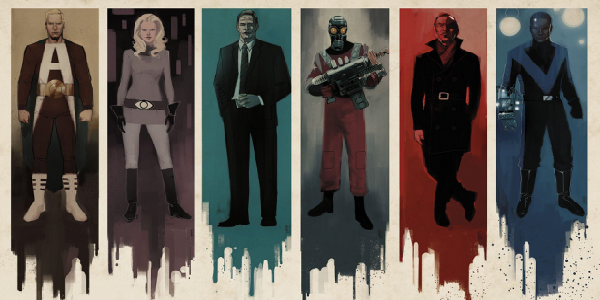 C.O.W.L. approaches the corporate side of superheroes by putting Watchmen themes on a Mad Men setting.

C.O.W.L. #1 compiles #1-#5 of the C.O.W.L. single issues from Image comics. It’s a 1960’s superhero story set in Chicago, that has been pointed out as having a varied list of influences that include POWERS, Watchmen, and even Mad Men. It could be considered flattering to put it on the same level as these other works, but in reality C.O.W.L. Presents a nihilistic view of the superhero game, but is also surprisingly balanced when compared to POWERS and Watchmen because there seems to be no actual force for good present in the story at any point. The biggest surprise of all might actually be that despite one of the common themes of superhero stories being morality, truth, justice (blah blah blah) C.O.W.L. is much more focused on the corporate and political ramifications of meta-human emergence in post-post World War II Chicago. So, the question still does remain. How do you build a superhero story without powers or action? That’s where C.O.W.L. surprises in building it’s mythology, by only using superpowers when it’s absolutely necessary for the plot. It’s a much rarer occurrence, and therefore made to seem more significant. The powers actually matter, and aren’t used in any ill conceived or shallow way.

Truth be told, you’ll be thankful that powers and action don’t come in to play all that often, because the intricacy of the scene composition, and the muddied art style itself, makes the motion and effects of the action scenes look too busy to be easily followed. I found myself getting lost so often, that whenever there was an action scene I just sort of glanced over it, and picked out the details I thought would be important. Because I had so much difficulty following these types of scenes I found myself dreading, not looking forward to, them. This should never be the case. There were times when the characters were far enough a 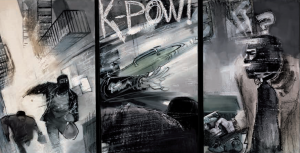 way from each other (or even the action) that it didn’t run together, but on the whole, it was too crowded in the panels to decipher; in fact, melee scenes proved to be especially nightmarish to unravel due to the amount of different elements in these panels.

Regardless of the progression of the fast moving parts, Rod Reis’ art is still breathtaking from an artistic point of view. Static scenes convey so much more personality and suspense than their kinetic counterparts, and fit the corporate espionage aspect of the story like a glove. The settings and tones are all beautifully realized with loads of different types of architecture and characters that fit the time period, and more importantly, the Chicago setting. The characters and the setting are successfully grounded, and the sense of scale that Kyle Higgins and Alec Siegel are presenting, by limiting the use of superpowers and property destruction, is maintained successfully by that art.

The story starts in the middle of the action (which we already talked about), so when everything grinds to a halt, it takes a while to catch up. Once you do though, the story maintains to same pace consistently and begins to level out. Despite the city setting, it’s all very small and focuses on a select number of people, so every time there’s a 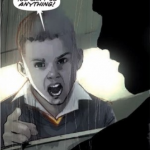 conversation referring to an earlier event, or action of another character, you actually see it happen (or at least know of which character they’re talking about). This keeps the universe of C.O.W.L. very contained and personal, so even seemingly miniscule events seem to have impact. The narrative is stretched out to no fewer than four different perspectives at a time, but never seems to spread itself too thin. This is the genius of C.O.W.L. (and a reason it’s compared to Watchmen) because it’s a character driven story with near flawless narrative progression and a brilliantly orchestrated sense of cause and effect. All the characters seem to be contributing to the same plot. Everything is connected. Every event, no matter how seemingly innocuous, is working toward the greater storyline and comes in to play naturally as that story progresses.

C.O.W.L. #1 is not for everyone because it’s not your typical superhero story. The action is indecipherable at it’s worst, but the art still draws the eye and conveys suspense effectively. The story is intricate and intelligent, and filled with intrigue, backstabbing, and all sorts of tricks and traps that one can expect when dealing with a narrative with a corporate and political focus.  The 60’s setting as well as the topical (or historical…) approach to a realistic view of the idea of superhero unions really keeps things fresh and interesting.  C.O.W.L. doesn’t hold your hand and if you get lost it’ll leave you behind without a thought, but if you pay attention and make the effort to be engaged it’ll tell you a clever, politically charged tale that you wouldn’t be able to find anywhere else. If you want a unique and mature approach to superheroes, C.O.W.L. #1 is sure to be the perfect book for you.