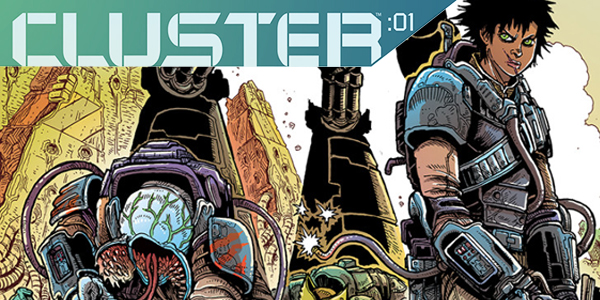 Stuck on a strange planet in a prison outfit, Samara and her squad must do all they can to survive.

BOOM! Studios released a new series in the beginning of February called Cluster. The story is written by Ed Brisson, with art by Damian Couceiro, and colors by Michael Garland. The promo for this series promised a gritty, violent, sci-fi epic and so far they’re right on point.

The Skinny
Samara Simmons is the daughter of someone important, but not important enough to save her from some bad decisions. Because of this, she ends up at Midlothian, a prison facility set up to train prisoners to be soldiers. Faced with either a prison sentence or a militaristic one, Sarama chooses to arm up and head to the front lines. With limited training, and fewer allies, she’s forced into battle when her ship gets hit. Thanks to the punch in their chests, Samara and her squad are forced to try and make it back within the prison walls before they expire violently.

The Good
Samara and Grace are fun contrasting characters to root for. Cluster toes the line between Tank Girl and Guardians of the Galaxy, and looks like it’s going to be a fairly straightforward story of survival at all costs. The art is detailed and gritty, and doesn’t shy away from experimental panel layout, like the three panels that make you read with taco neck when Samara is laying on the ground. Three quick panels, but as I was reading it, I felt a tighter connection to Samara and her plight.

The Not So Good
To be honest, I was apprehensive to start this series. Nothing about it felt exciting or original. Having read the first issue, there’s enough in the characters to entice me to continue. However, I’m going to look for more than just a dire premise and some badass chicks with guns as Cluster tries to show us that orange is the new blast.

The Decision
Despite feeling a bit cliche, the story seems interesting enough for me to want more. The characters are fun and familiar, and are worth your attention. At times the story can be funny which allows for some nice rests between brutal gun blasting scenes. There appears to be a deeper story taking root, but for now we’ll just have to see if the team can make it back in time when Cluster #2 comes out on March 4th.