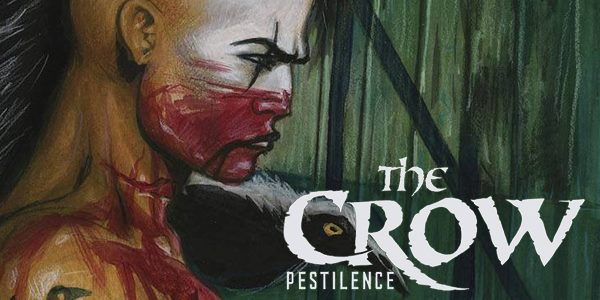 How does this new Crow measure up to past incarnations?

The Crow: Pestilence is a four part story written by Frank Bill and illustrated by Drew Moss. Created by James O’ Barr in 1989, The Crow chronicles the story of a young man named Eric who is tragically murdered, along with his fiance, by a gang of thugs. Years later, he rises from the dead in order to exact revenge on his assailants and to punish them for their role in in his fiance’s rape and death. Ever since, The Crow stories have followed the same or similar themes of loss, love, life, and revenge. The Crow: Pestilence tells a similar sort of story foll

owing Salvador, a Mexican boxer, father, and husband who dreams of a better life in America. He turns on the mobsters who paid him a lot of money to throw a fight, and ends up getting himself and his family killed in the process. He comes back (like you do…) in order to exact revenge.  It’s a story about righteous vengeance following a capable hero who only wants what’s best for his family.

Unfortunately, the whole thing moves way too fast. Not just the story, but the action in the panels. It gives the impression that the entire comic is on fast forward, and if you aren’t reading with your eyeballs right against the page, you’re going to miss something. Salvador moves from scene to scene very quickly with no specific explanation. He beats cars to locations on foot, he stands up from a prone position with no actual process of movement. He’s like Jason. No matter how fast his victims are, they can’t outrun Salvador, who moves at the speed of plot. But nothing about the scope of his abilities gives any indication that he should be able to do this. He’s a grounded character with actual limitations. It makes for some confusing entrances to scenes that he shouldn’t be in, according to the perception of how much time has passed.

The dialogue is atrocious. It makes sense only sometimes, but only in a cryptic and contextually effective way; and at it’s worst it’s incomprehensible, unnatural, and clunky.  At first I figured that it was because they were Mexican characters who were speaking English, so it would still sound a little unnatural.  But after reading for a bit, I realized that the speech was just overly dramatic, exaggeratedly enunciated, and too heavily focused on

exposition. Characters talk to each other in familiar fashion, but over explain things for the audience’s benefit even though the character they’re having the conversation with has all the information.  This is a common problem in stories of a supernatural or highly fictionalized nature, but they don’t even try to hide it; it’s yet another story from the school of Martin Scorsese (“Assume your audience are idiots.”). I understand this practice from a narrative perspective, but from a reader’s, it’s downright insulting. Things that were explained five pages ago are explained again in the exact same way. It’s just plain dull to have to read again, but it also wastes valuable time that could be spent on forwarding the story.

Which is a total disaster…Salvador’s revenge starts out pretty simple, it’s got some decent action scenes, buckets of blood, and brutal finishers that seem to set this particular installment to be one of the most raw and unapologetic ones in the anthology. Then it introduces other supernatural elements, double crosses, and mistaken identities that don’t so much add complexity, as make the story incredibly convoluted. It’s such a train wreck to watch these plot twists happen at such a break-neck speed that they don’t even have enough time to matter. Everything barrels forward at an reckless rate to an ending that lacks any feeling of accomplishment or satisfaction. Then, it’s over.

Despite the insane and impossible to follow story of The Crow: Pestilence, the art has a tremendous amount of personality. Everyone has a particular look and design that’s intriguing and fits the setting (but if the character is a woman with long hair, good luck trying to figure out who she is). The scenes don’t always match up panel to panel, making for some moments of real confusion as the action lurches forward 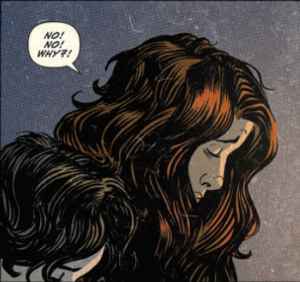 and then stops suddenly (imagine a student driver), the characters randomly change positions, making it impossible to imagine what the scene actually looks like. It’s a mess, through and through. I love, and have loved most of the Crow stories (and have even taken away at least one thing that I liked from each movie), but this is a crime against narrative and comics. It doesn’t drag, it just dies and yet somehow keeps going. It stops making sense, then wraps everything up with cheap shots and cliches. There are a few good points such as intense fight scenes, brutal and cringe-worthy deaths, and Salvador’s story truly is interesting. But it’s not presented correctly or paced sufficiently. There was real potential here, but it falls so short of expectations that I’m sad to say that this is one for the birds.