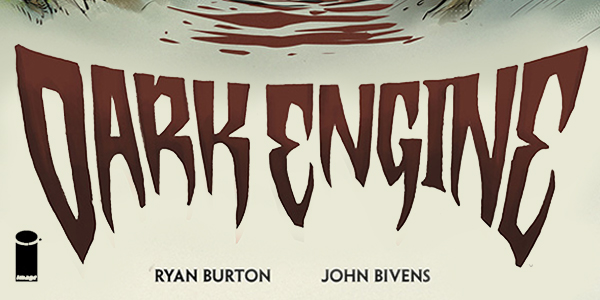 A weapon of a woman, created by alchemists, travels through time in search of demons, viciously murdering all she crosses.

New this week from Image Comics is Dark Engine #1 written by Ryan Burton with art by John Bivens. The pair have concocted a nightmare inducing story about a world controlled by “sporedevils,” these evil lizard looking things with spiral eyes, and inhabited by alchemists. In hopes to stop the brutal takeover of the sporedevils, the alchemists create a lethal weapon, and send her back in time to end the evil before it starts.

The issue starts with sporedevils, who are lead by a being known as Dragon. He is a horned beast of a creature, and can be seen scanning the horizon, searching for the one thing that could bring his downfall. As he puts it, “she has locks of gore with ribsword in hand, and she has survived since the beginning”. Basically, what you need to know is, he’s looking for the alchemist’s weapon, and she is brutal as all hell.

We finally get to lay eyes on this magnificent killing machine on the fifth page. She is shown dismembering a couple of dinosaurs piece by piece then roasting them over an open fire. Although she is intelligent enough to fashion a shiv for herself from the bones of one of the dinos, she apparently isn’t modest enough to fashion herself a shirt. I guess she is wearing a necklace that periodically covers her up, but to the watchful eye comes the occasional nip slip. It also seems that the woman, known as Sym, doesn’t talk much. This allows Bivens to drive the story with his seductively shadowy illustrations. He is also not afraid to go big, showing her in a full spread, perched on a rock, stalking her prey.

From here we head to a black dagger of a spire surrounded in blue and purple mist. This is the home of the alchemists, and we see two having a discussion on their deck about Sym. Paul and Jin have a strange conversation about how the engine sent Sym back in time to stop the sporedevils from starting. They talk about how Sym was created by obscene magic, and how the cofferwright put the engine inside her. One of the guys, Paul, watched it happen. Watching Sym get sent back in time has some serious side effects. Paul confesses about how he is forced to continuously think about the day he had to murder his sister so the sporedevils couldn’t get her. Ultimately, much to his buddy Jin’s dismay, Paul takes flying leap off the tower, brain first. Then some dude from the shadows comments on it being a good idea because Sym was sent back farther than she was supposed to. He thinks the engine will try and right itself, but everything Sym comes in contact with will die in the process.

The issue wraps with a series of pages without any dialogue. What I gather is that Sym suddenly grows some vines and stuff from her chest, which apparently is how she time travels. She goes from murdering the crap out of a dino to making a hippopotamus explode somewhere in Egypt. Two shepherds watch the madness unfold and Sym step out from the hippo’s innards. Once they lay eyes on her, they bow before the god they know as Ammut, a part crocodile, part hippopotamus eater of souls.

Dark Engine #1 was a pretty bizarre read. I really enjoyed Biven’s gore filled panels of dino death. The way he worked the sound effects into the action is clever and makes for a smoother read. That being said, some of the panels were a little confusing to understand. I can appreciate Burton’s choice of not filling the panels with superfluous copy, however, a few narrative bubbles could have better help the reader understand the action, especially towards the end– there’s one page in particular that’s just a combination of vines, boobs, blood and confusion. As the series progresses, I hope to gain a better understanding of who Sym is, and how she’s able to kill so well.