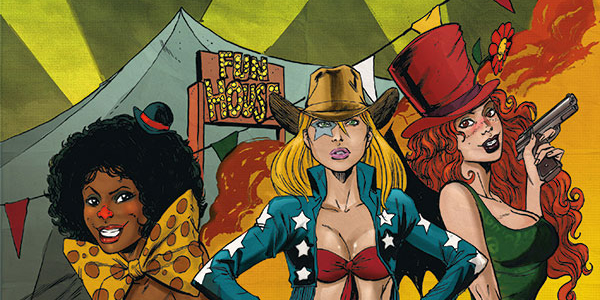 Will the ladies give up clown life and become contract killers?

A case of mistaken identity gets a group of 4 female clowns into contract killing. Chloe, Candy, Tina, and Aya are all clowns with a traveling circus. Day in and day out they deal with life at the bottom of the circus heiarchy for cheap pay, until a Elvis wanna be named Wayne walks into their life with a deal of a lifetime. Fifty thousand dollars to take out competition for his uncle, but first they must show their loyalty by taking out  a local drug dealer. Rico is the drug dealer the girls go to for their quick fixes, and turns out to be the target. Wanting a quick fix to take away the pain of being circus clowns the girls head over to Rico’s for a score but instead Rico tries to show Chloe that hes gonna score with her instead. Given no other choice the girls take out Rico. Torching the place after taking Rico out they decide to call Wayne and take the job.

A nice change of pace from the usual humdrum story lines. The unique twist of female clowns gives it that extra little something that could have been missing otherwise  Tim Seeley’s cover art also adds some fun to the book as well.