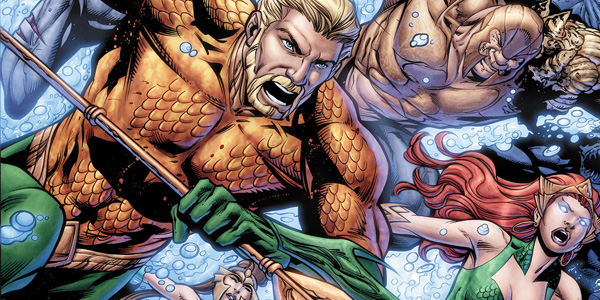 The Death of a King story line by Geoff Johns wraps up today in Aquaman #25 from DC Comics. Can Arthur save his queen and Atlantis from the Dead King? 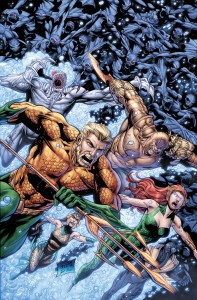 Beaten and cast out of his home, Arthur is searching for Dead King’s scepter, which will give him control over the Trench. Meanwhile in Atlantis the Dead King is geting an update from Nereus on the search for the Seven Seas. Mera is holding her own in the prison along with the other Arthur supporters. Arthur returns to free Mera and the others, but is attacked by the Dead King, the two battle, and the true king of Atlantis wins. Now faced with rebuilding a city and people Arthur chooses to stay, even though Mera wants to leave. The two stay and rebuild, but there is something sinister in the surface world. After the battle Nereus escaped, and tracked down Orm. It turns out he did find the Seven Seas, and has plans to put Orm back in power. The epilogue gives a good jumping off point for the next arc, which will lead into another Justice League cross over.

The newest arc proves once again why Aquaman can be a compelling character with a rich supporting cast. He has in the past mostly due to Super Friends been cast as the joke of the DC universe, but like his name his stories share a lot with Camelot. There is action, adventure, magic, and did I mention action all under the sea. This will be Johns’s last issue on the title, with Jeff Parker taking over writing duties. Johns did a great job elevating the character, and hopefully Parker can keep up the great stories.