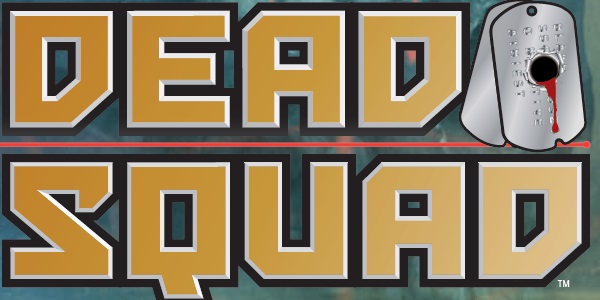 An over the top action/sci-fi from television writers Matthew Federman and Stephen Scaia? Did IDW hit the jackpot?

Dead Squad is a comic from the newly formed Darby Pop Publishing being distributed by IDW. It’s written by Matthew Federman and Stephen Scaia, with pencils by Michael Montenat and colors by Douglas A. Sirois. The basic gist of the plot is that a team of well trained special forces soldiers are sent to retrieve an unknown package from a group of terrorists, but something is wrong with the mission, and the soldiers might just be the unwitting accomplices in someone else’s agenda.

Yeah yeah…betrayal and soldiers are like peanut butter and jelly. So just what *is* different enough about Dead Squad to make it worthwhile?

Truthfully, nothing and everything. It’s absolutely worth your time because it does what it does (regardless of how tired) so well. The characters all talk like regular people, maintaining appropriately casual conversations, all while paying attention to their levels of experience and rank. In other words, they talk like soldiers. It’s a detail that’s usually overlooked, because soldier characters don’t typically have a long enough lifespan (in comics) to really focus on. This emphasis on how these characters interact gives us a natural segue in to understanding the world they live in and their perspectives. It’s a proficient way to introduce exposition, without making the audience feel like they’re having everything spoon-fed to them. They automatically come off as terribly focused heroes with realistic personalities. 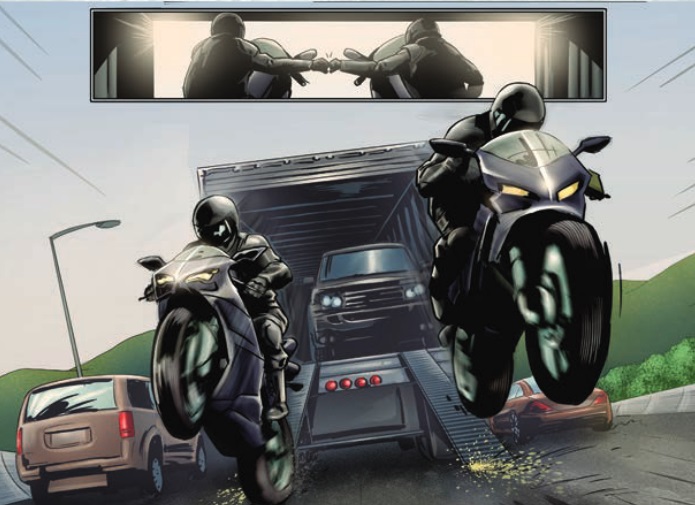 Which makes the ridiculousness that follows all the more jarring. This is the first mission that we’re seeing Delta Squad on, and right off the bat we see how incredibly low-key they are in their reactions to their job. But once the door bursts open all hell breaks loose, and next thing you know you’re watching a high-speed chase with stunts and guns, and motorcycles. It lacks subtlety, so it could never be considered a serious military operation or story, but instead it calls back to the nonsensical action scenes from 90’s action movies. It’s fun, and dangerously close to self-parody. Luckily, the thing that keeps the whole things from going too over the top is the attention to detail in the writing of the dialogue. It’s just enough to ground the characters without being forced to explain too much. There are the typical “bro-love” moments that are a little too familiar at this point in the game, but the writers know enough about controlling tone and environment to know when it’s best to just let the action speak for itself. It’s that decision that puts a lot more pressure on the art to match up.

Starting with a car chase ends up being a good idea though, as Michael Montenat proves to be excellent at conveying the intensity of speed. But more than that, he manages to keep track of the sequence of the action, while maintaining the pace; all this while also keeping track of little things like bullet holes, locations of the other cars, and geography of the road. The opening action scenes are filled with these little details that add to the intensity and make it stand out not just because of the context, but the execution as well. He proves to be just as good at scenes of extreme tension and desperation when the story hits it’s climax at the stadium. Douglas A. Sirois keeps up with the mysterious tone of this scene in particular 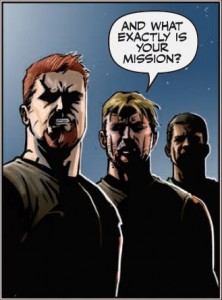 by using the appropriate hues and shadows. It’s all carefully maintained by using light and and shadow over the dialogue when it’s appropriate.

That’s what makes Dead Squad stand out so much. Instead of attempting to mask the obvious and overdone themes in it’s story, it revels in them; but it manages to do so without making fun of itself. It takes everything it does seriously, despite the creators obviously having a lot of fun doing it. It’s professional work on all fronts by people who actually care about maintaining their narrative flow. The writing is approached from a very basic front, proving it’s elegance in simplicity. This simplicity doesn’t come over with the art though, which is detailed, violent, ridiculous, and despite all of that, really really fun and exciting. The sci-fi element is shoehorned in at the last leg, but that works out well considering the overwhelming level of action of the rest of the volume. This is the kind of story that the kids who played with GI Joes in the sandbox always wanted to make. And now that they’re older, it’s good to see that they still want to make them.