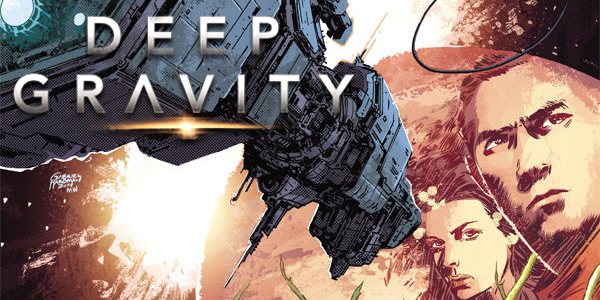 Deep Gravity #1 is a chilling tale of intergalactic space travel and the trials that result.

New this week off the Dark Horse imprint comes Deep Gravity #1, a chilling tale of intergalactic space travel and the trials that result, told in four parts. The story comes from Dark Horse Founder, Mike Richardson, with the script by Gabriel Hardman and Corinna Bechko. The art for Deep Gravity #1 is created by Fernando Baldó.

Initially, I found it interesting that the creative team deemed it important to assert the definition of Deep Gravity at the top of the title page. So we’re all clear, a gravity well is a term describing the pull of gravity by a large mass on a smaller mass in space (like the Moon around the Earth). The term deep gravity refers to the lowest point of this gravity well. It becomes clear, pretty quickly, that the title also alludes to the gravitational pull of people or things we care about, but that’s getting a little ahead of ourselves.

At the center of the story lies Poseidon, a sister planet to Earth that is a three years’ journey away. It is a massive planet that orbits a red dwarf star, and is 90% covered by water. Coincidentally, the planet of Poseidon is so volatile, that a stay of longer than three years is considered dangerous and deadly. The story begins as Vanguard, a deep space freighter ship, is approaching the planet and ready to swap out some workers. A technician is seen space walking, trying to repair a faulty sensor. Despite some struggle and a potentially lost wrench, the technician, named Paxon, manages to make the repair. While Paxon is on his repair trip, the guys in the cockpit give us a little backstory. Turns out Paxon took a huge pay cut to take a job as the ship’s engineer. All these people work for Maelstrom, who won the contract to work Poseidon. Given that it is such a large contract, the pressure is high to maintain efficiency to ensure the contract’s life.

From here we follow Paxon down to the cargo area. The Vanguard’s cargo is mostly sleeping workers at this point, all of whom submit to a three year coma-nap for the commute to Poseidon. Paxon’s fix allows the Vanguard to enter Poseidon’s orbit, so the time has come to get the crew up and ready for deployment. Can you imagine what coming out of a three year snooze would feel like? Anyway, Paxon meets up with his buddy Greg, who is fresh out of dream state. The crew assemble into a transport ship and make their way to the surface. Some more backstory and facts are given, to fill the reader in on how life on Poseidon really works. The workers are going to experience higher gravitational pull, increasing their chances of feeling clumsy and sluggish. There are a lot of alien plants and animals, and it’s just all around better if they leave everything alone. Basically, they’re there to keep their heads down, get their work done and make sure to hop a ship in three years or they’ll die by the planet’s hand. The Vanguard’s mission is to transfer the personnel and supplies from ship to planet, then in five weeks, head back for Earth.

The surface of Poseidon is reminiscent of Jurassic Park, in that it has a small city encircled by cabled walls, and surrounded by a vast wilderness of deadly monstrosities. Paxon and Greg are finishing up their first day of work, and walking along one of these walls. The two are talking about whether or not Paxon has seen someone, suggestion that Paxon made the entire trip to Poseidon out of love. While deep in conversation, a slithering tentacle seeps out of the forest and slides between the gap in the cable fence. Without warning, the full force of the creature begins attacking the pair of men. The creature is covered in tentacles and can spit a green acid cloud of pain. It doesn’t take long for the security team to show up and subdue the beast, but in the conflict, Greg is hit with the acid spit on both of his legs. This puts him in the infirmary, fighting for his life, or at least his limbs.

Following this scene, we catch up with some of the workers, trying to corral a giant double sided elephant looking thing into a large steel cage. There is a tough looking woman in a green baseball cap barking orders, named Michelle. Paxon approaches her slowly, and reveals that Michelle is the reason he made the trip to Poseidon. The two were lovers back on Earth, but Michelle broke it off to go work on the alien planet. While they’re bickering, no one is paying attention to the giant creature and it revolts. It begins stomping and wrecking but Michelle knows how to stop it. The writing team introduce a very interesting concept here. They implement a bright light which stuns the beast in its tracks. Due to Poseidon’s sun being a red dwarf, the creatures aren’t used to bright lights, and freeze when experienced. This allows Michelle to run up and tranquilize the creature to submission.

At the end of the five weeks, we learn that Greg won’t be able to make the trip back. He’s lost a good portion of both his legs, and is still too early in the healing process to enter a hibernation chamber. So he’ll be forced to wait three years on the surface of Poseidon until the next travel ship comes. Paxon is forced to say goodbye to his buddy, because the Vanguard is prepping to make it’s return journey. We see another quick attempt at conversation between he and Michelle, but she isn’t interested. We also check back into the cockpit just in time to see panic rise on their faces. Someone or something is messing with the ship, and as the book closes, we see a giant explosion ripping through the hull of the ship.

Deep Gravity #1 sets the stage for a suspenseful deep space story. The creative team have developed a good assortment of characters, which typically means they should be inclined to kill off main characters. The premise feels somewhere between Star Trek and Jurassic Park. Baldó’s art is very expressive and uses varying panel compositions to keep the reader interested in turning the page. Overall, Deep Gravity #1 appears to be an intricate interstellar adventure and has my interest for #2.