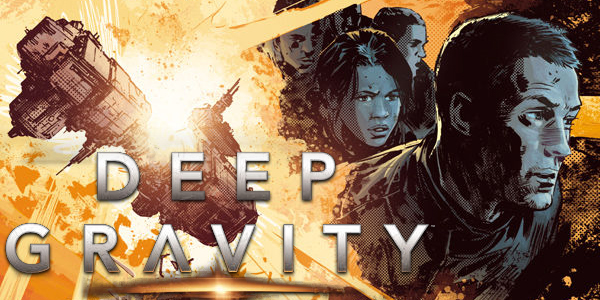 Crisis erupts deep in space as the chilling story of Deep Gravity continues to pull its readers in.

Recently released from Dark Horse Comics comes the second installment in the Deep Gravity series. The story comes from Dark Horse Founder, Mike Richardson, with the script written by Gabriel Hardman and Corinna Bechko. The art for Deep Gravity #2 is created by Fernando Baldó with colors by Nick Filardi. At the end of the last issue, a giant explosion tore through the side of the Vanguard, a ship leaving the mining planet of Poseidon, causing a crisis for those left alive on board.

The opening of Deep Gravity #2 picks up right the last issue ended. Bodies can be seen floating in pods, some with terrified inhabitants as they watch the last of their air slip through the crack in their armor. Worse yet, the entire ship is beginning to decompress, sending all on board into a panic. We see Flores and Paxon being pulled towards a breach in the ship’s hull. Fortunately, Flores is able to pull a switch which seals off the hole and stabilises the ship. This also causes everything that was floating to come crashing down to the deck. Once settled, they are able to begin surveying the scene. The damage is vast, and the crew has a lot of space to cover while searching for survivors, so they waste little time getting to work.

While searching for signs of life amongst the twisted metal, the crew begin to hypothesize on what caused the blast. Corrupt fuel cells? Meteor? For one reason or another these all get dismissed, leaving the crew clueless. The conversation eventually focuses on how they plan on getting out of this mess. The communications are down in the bay they’re in, and rescue isn’t coming for at least three years, so the team decides to mount up and try to find a working terminal. It doesn’t take long to learn the issue is ship wide. The mounting tensions cause the crew to start fighting amongst themselves until Flores speaks up. The damage is massive and the breach is in the hibernation ring. At this rate, it’s doubtful there are any survivors, including Michelle, Paxon’s love interest and the reason he is here in the first place. Oh, and there’s one more fun little nugget of nastiness. The Vanguard is a deep space ship, which means it’s not made to handle entering the atmosphere of a planet like Poseidon. Unfortunately, without engines, the ship is in a decaying orbit towards the planet, and in fourteen hours they’re all doomed. DOOMED!

Back down on Poseidon, the staff received the automated SOS call from the Poseidon, but have little else to go on. After some discussion, the team there want to have someone pilot a six-man shuttle to go help with survivors, but no one is qualified enough to man the ship. Greg, Paxon’s buddy wakes up to the same startling news. Could he be the one to save the crew of the Vanguard?

Back up on the Vanguard, tempers flare between Paxon and Drummond. Drummond is technically the senior officer, and he suggests to wait for help instead of the proactive Paxon approach. Paxon suggests they head to the repair ship docked on the ship’s bow, which just happens to be on the other side of the ship. The two men argue more but the door to the next room ultimately gets opened. On the other side is a fire that seems to be growing, attempting to consume everything in sight. All seems lost until Flores uses a map of the ship to find a route. Despite Drummond’s naysaying, Paxon arms himself with an extinguisher, and clears a path to the hatch in the floor. Marshall, one of the women survivors, is apprehensive to jump down, but Paxon’s able to pull her in before the fire up top grows out of control. The danger doesn’t subside though, as they make their way through the service crawl space, the walls begin heating up. It seems the fire is growing hot enough to melt the walls of the shaft. Paxon is able to make it to the other side in time, Marshall however isn’t as lucky.

On the other side of the tunnel, the team onboard the Vanguard get a better look at the destruction. Baldó draws a full panel of pure destruction. I love how gnarly the metal scraps look balanced out by the lifeless eyes of the floating deceased. Paxon believes he’s too late to help Michelle, because judging by what he see’s, there’s no way she’s still alive. Have I built it up enough? I bet you’ll NEVER guess who’s still alive. It’s Michelle, and she’s a little scratched but as alive as ever. After the niceties, the team collect to go over options. To quickly sum it up, they have none. Paxon resolves to pop in his 50 Cent cd as the team attempt to get saved or die trying. Lastly for this issue, we see another survivor in a different part of the ship. He appears to be alone and is looking for help. However, he turns a corner to find the hungry jaws of one of Poseidon’s beasties, ready to chomp.

Deep Gravity #2 is a captivating and thrilling read. I always like when miniseries keep the action moving, mostly due to a lack of real estate for drawn out dialogue. Hardman and Bechko give us characters to connect with, making the dialogue of Paxon the protagonist very natural and feel-good. I picture him with the confidence an older brother would display over his younger. Baldó and Filardi combine to create a cold and intimidating atmosphere where pain can surprise you at any turn. The coloring on the explosions contrast the bleakness of space so well. At this point, I don’t foresee the possibility of me escaping the gravity of this story until it’s through.