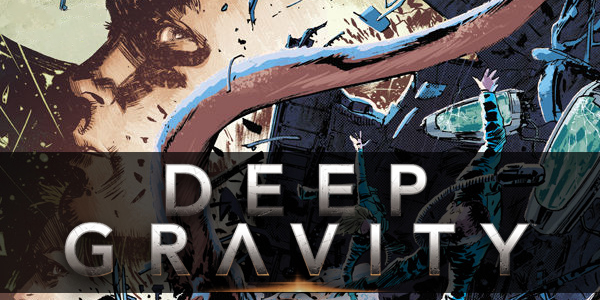 The newest issue of Deep Gravity from Dark Horse reminds us that in space no one can hear you scream, but they can still watch you bleed.

Dark Horse released the third issue to their four part series called Deep Gravity. The story originated from Mike Richardson, the scripts are written by Gabriel Hardman and Corinna Bechko, the illustrations are by Fernando Baldó and colors are by Nick Filardi. We rejoin the crew onboard the Vanguard as they sit helplessly in orbit around the alien planet of Poseidon, as they weigh their options while facing certain death.

The crew onboard the Vanguard need to act quickly if they want a shot at survival. The ship in on a collision course with the planet, and due to it’s size and how it was built, it doesn’t stand much of a chance against Poseidon’s atmosphere. Also, to add insult to injury, parts of the ship are on fire, and the room the survivors have found refuge in is slowly heating up. Paxon, one of the main characters, gets the idea to launch himself across open space in an attempt to get to the service ship on the other side, and ultimately to safety. However, in addition to being very dangerous due to the amount of debris, all they have are air canisters hooked up to a mask. This would allow Paxon only a few minutes to reach the other side before his air is depleted. All this high tension talk has put a rift through the crew. Bezzerides gives up and pardons himself from the rest of the crew to do some praying and to prepare for his ultimate fate. While he does this, Paxon and his love interest Michelle step aside so Paxon can explain himself. He admits to being a bit of a stalker, but attempts to convince Michelle that she shouldn’t feel threatened by him. During this conversation they hear a blood curdling scream come from Bezzerides’ direction, and find no traces of him other than a bloody air vent.

Michelle takes little time to diagnose the threat. The monster that she insisted shouldn’t be brought on board has gotten out, and is currently making meals out of the crew. This new threat alters the survival plan drastically. Instead of just Paxon making the leap, everyone is going to try it, justified by the fact that they face certain death against the galeocrinus, which essentially is a octopus/snake hybrid that can fit through any size opening due to it’s lack of skeletal system. The survivors have little time to deliberate due to the galeocrinus crashing through the walls while looking extra hungry. What happens next is hands down the most suspenseful part of this series. The airlock opens, launching the remaining survivors, as well as the galeocrinus into open space. The next four pages have no dialog, but are no less thrilling. Baldó draws the crew shoot off into space, and some of the people collide causing more casualties. We can also see the debris come into contact with another crew member, causing a wound to open up. The most gruesome panels were the last two before Paxon manages to get the other door open, where another crew member gets impaled on a spike just before making it across. Ultimately, only four are able to make it across, including Paxon, Michelle, Flores and Dennard, the ever growing protagonist.

Just when they think it’s safe, Michelle feels a tentacle wrap around her ankle. Turns out the galeocrinus made it across too, and is still hungry. The four run down a hallway in an attempt to flee, and find themselves in a dead end with a sealed hatch preventing their progress. Just when it looks like the galeocrinus is about to devour them all, the door swings open, and they manage to close the hatch before the creature finds his way in. Once the crisis has subsided, the remaining survivors are elated to see they aren’t alone. Captain Chadwick and a small team are still alive, and they know something about Dennard that Paxon and Michelle don’t. Chadwick tells us that what happened to the Vanguard was no accident, it was sabotage. Before we learn the whole story, we check back in on the surface of Poseidon. There is a rag tag team being assembled to try and help the Vanguard’s survivors, but no one is qualified to fly it. Thankfully, the legless Werner still has all the parts he needs to fly, and volunteers for the job.

We head back up to the Vanguard, where Flores is punching Dennard in the jaw. The story goes that Dennard was paid a large amount of money to delay the Vanguard, which would cause the contract to default, and allow one of Maelstrom’s competitors to scoop the high paying contract. He claims he never meant to hurt anyone, just derail them for a little. While this questioning is happening, another alarm goes off signaling the ships’ exterior is heating up due to Poseidon’s atmosphere. While everyone’s attention is focused on the new threat, Dennard makes a break for the last remaining escape pod, damning the rest of the crew to their fates on the Vanguard. However, before the book ends we get some retribution as we watch Dennard’s ship erupt into a fireball upon entry into Poseidon’s atmosphere. However, with the last panel, we see the foreboding curl of a galeocrinus tentacle slowly creep up behind the crew.

Deep Gravity #3 is a thrill ride to say the least. The past two issues have had their fair share of suspense, but this issue blows the previous two out of the air. Watching the crew traverse the open space has to be some of the most time I’ve spent looking through the small details of the art. There’s a lot of death and destruction in a few short panels, and I wanted to make sure I caught it all. I’m obviously hopeful that the team will be saved in time, but being unfamiliar with these writers means that I have no idea what to expect. We’ll see if Werner is able to save Paxon, Michelle and the rest of the Vanguard survivors when this series concludes on October 29th.