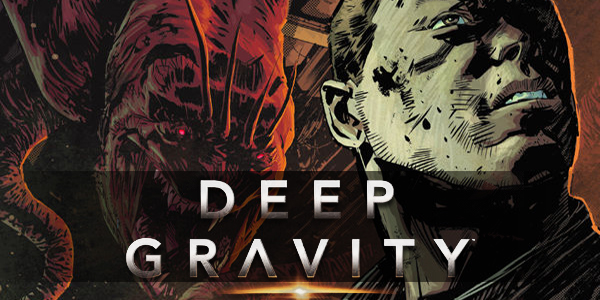 In the thrilling conclusion to Deep Gravity, how will the crew of the Vanguard escape their burning coffin while dodging ol’ dagger jaw?

Dark Horse released the conclusion to their four part series, Deep Gravity. Mike Richardson created the story, Gabriel Hardman and Corinna Bechko wrote the scripts, Fernando Baldó is drew the panels while Nick Filardi colored them in. When we left the staff aboard of the unavailing Vanguard, the crew was weighing options as the vessel continued to fall towards destruction.

As parts of the disintegrating ship become meteors that fall towards Poseidon, Paxon and his love interest Michelle attempt to steal one last moment. Their fiery death seems all but assured at this point, but unbeknownst to them a giant tentacle covered monster has other plans for their demise. The galeocrinus, also known as a leo, attacks from the ceiling and begins devouring another one of the remaining crew. In what appears to be the final showdown with the slithering beast, it’s the captain of the vanguard that takes charge. However his actions prove moot when explosions rock what remains of the hull. They’re going to die, all account of one company trying to hijack the contracts from another through backstabbing tactics. Then, miraculously, a rescue ship emerges from the planet’s surface. The survivors stand a chance, but they have to get past the leo to get to the airlock.

It’s the captain that ends up making the ultimate sacrifice. He attacks the beast with a steel rod, which quickly get the beast’s attention. While he’s getting munched on, the four survivors break for the airlock, and are able to board the ship with little conflict. Ok, I lied. Another crewman totally gets wrapped up in tentacles then ripped up in dagger jaws. I think his name was Meyers. In any event, after he’s pulled from inside the rescue ship, Paxon’s able to wrench the hatch closed, ensuring no more slithering visitors. The following two spreads are awesome if you dig outer space explosions. The rescue ship, piloted by the legless Werner tries to outrun the pursuing Leo while safely entering Poseidon’s atmosphere. Eventually, the Vanguard gets too close to the planet, and erupts with a massive explosion that barely misses the rescue ship. The leo however doesn’t fare as well.

Werner is still trying to save the lives of the people on his ship. His rescue pod is coming in hot, and a crash landing is to be expected. I liked the panel of the people on Poseidon watching the comets fall, the remnants of the Vanguard. Werner gets the nose up, and the ship digs into the surface. It takes three intense panels, but the ship eventually comes to a stop and is met by a surface fire support team. Once the first responders are able to get to the victims, they’re met with good news. In the midst of the wreckage, we find the survivors slowly emerging. Turns out Werner managed to save everyone left alive on the ship with his flying abilities.

We end the series with a scene between Paxon and Michelle. If you remember, the Vanguard was supposed to be her ticket off this planet, the spacecraft that was going to take her back earthside. She had already spent as much time as the human body is allowed to spend on Poseidon, and unfortunately, another ship isn’t due for three years. Instead of freaking out, Michelle instead takes Paxon up to a private spot to watch the moons cross and the sun set. He’d finally got his forgiveness, but it would seem the time he has left with Michelle is fleeting.

Deep Gravity was a pretty good series overall. What I assume started as an idea of how to mess with a space craft, turned into an epic page turner adventure. I felt the suspense throughout the story was spot on. Some of the justification for why someone would mess with Maelstrom’s contract was downplayed in the story, and might have been missed if the intro didn’t remind the readers. The illustrations and creative creatures were great to look at. The threat of the leo became a bit too predictable at times, or maybe it was too relentless. I tend not to love disaster stories, but I think there was enough character building in Deep Gravity to keep me caring. If you’re looking for a short yet suspenseful series about space disaster, then Deep Gravity is for you.